Final throw of the dice 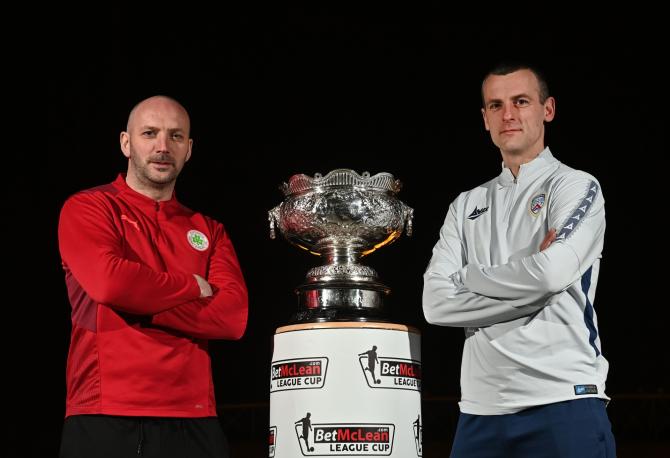 COLERAINE MUST do something this afternoon that they haven’t managed all season if they hope to win the Bet McLean League Cup - and that's beat Cliftonville!

The two teams have met four times already this term with the Bannsiders yet to record a victory over their north Belfast rivals.

The most recent clash came just over a week ago when the Reds recovered from a losing position to beat Oran Kearney’s men and progress to the semi-finals of the Irish Cup.

However, the Bannsiders get an almost immediate chance to put things right when the pair meet in Sunday’s novel final at the National Stadium but the odds are stacked against them.

There were encouraging signs in the Irish Cup loss at Solitude, not least the way in which the visitors unsettled their opponents after going in front through Lyndon Kane, but several controversial refereeing decisions impacted on the final outcome.

In the end, Paddy McLaughlin’s men held out for the win which sees them progress to an Irish Cup semi-final meeting with Crusaders and a potential gateway to Europe while Coleraine must focus on retining a trophy they won the last time it was played, back in 2020.

A number of supporters have expressed their disappointment at the final taking place on a Sunday but Bannsiders’ boss Oran Kearney remains hopeful that his players will receive their customary backing for big games at the National Stadium.

“The fans have a huge part to play,” said Oran.

“I remember the last League Cup final. We didn't start particularly well and we conceded early.

“But, to be fair, our fans were huge in number and also huge in voice. Particularly in a stadium like the National Stadium that's vitally important

“The Irish Cup final in 2018 was exactly the same. We talk about it being the 12th man every week but on days like this it's magnified ten-fold,” he added.

His opposite number, Paddy McLaughlin, also believes supporters will have a role to play on Sunday.

“I'm looking forward to it and hopefully it will be a brilliant occasion for both sets of fans. Both clubs are well supported and come out in their numbers making a lot of noise and the players will thrive off it.

“I know with our boys their adrenalin levels go through the roof when they see the Red Army out in force and hopefully that will be the case on Sunday. It's set up well for a brilliant battle," he added.

A crowd in the region of 10,000 is expected to attend this afternoon's game which is being shown live on Sky Sports.

As well as the players on the pitch, the weather may have a part to play in the destination of the cup.

Strong winds and heavy showers are part of the forecast for Sunday afternoon which may affect how both sides approach the game.

Let's hope it's the Bannsiders who will be singing in the rain later...