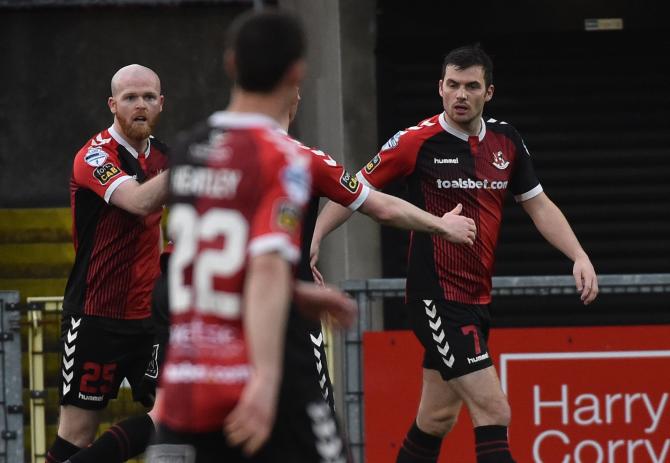 Philip Lowry would net the only goal of the game at Seaview last night.

A combination of poor finishing and a soft goal to concede would mean Coleraine suffered a 1-0 defeat to Crusaders last night.

The Bannsiders more than matched their opponents at Seaview but a solitary goal by Philip Lowry would prove to be the difference.

With one eye on the upcoming BetMcLean League Cup final, Oran Kearney made three changes to his starting line-up as Rodney Brown, Lyndon Kane and James McLaughlin all made way as they were one caution away from missing the showpiece decider.

The first chance of the game would arrive after just seven minutes as a long ball forward by Gareth Deane released the run of Eoin Bradley and his strike was saved low by Johnny Tuffey.

However, Crusaders quickly settled into the contest as Gareth Deane made a good save from Ross Clarke's effort, Jordan Owens blazed over from Jordan Forsythe's cut back, before Lowry failed to find the target after being set-up at the edge of the area.

On 23 minutes, Conor McKendry - who was handed a starting berth - would be the next player to have a sight of goal but his strike from distance didn't trouble Tuffey. Moments later, the match winning contribution would arrive as the Bannsiders fell asleep from a quick free-kick which resulted in Lowry firing under the body of Deane.

The Stripes' response would be excellent as Bradley, Matthew Shevlin and Jamie Glackin combined to release McKendry inside the box. The winger evaded several challenges but could only fire straight into the body of Tuffey from close range. A few minutes later, a swift counter attack saw Shevlin test the gloves of the former Northern Ireland international from outside the box.

Crusaders - who were winners in the Irish Cup last weekend - almost doubled their lead before the half-time whistle as Ben Kennedy's left foot effort seemed destined to find the back of the net before Deane somehow clawed the effort away for a corner.

The second-half would be a more quiet affair, although Deane would make a brilliant save on 51 minutes as Jude Winchester's piledriver from the edge of the area had to be tipped around for a corner. At the other end, a looping header by Stephen Lowry forced a corner which Stephen O'Donnell was unable to make a meaningful connection from.

After Johnny McMurray hit straight down the throat of Deane, Bannsiders boss Oran Kearney brought on Curtis Allen and James McLaughlin in a bid to find a much needed equaliser. On 84 minutes, they would carve out a wonderful opportunity as Patrick Kelly threaded the ball into Glackin but the winger was unable to convert against his former employers.

A minute later, a header forward by Josh Carson inadvertently reached Allen inside the box but the predator's half volley flashed wide of the far post.

In truth, a sore result for Coleraine to take as they deserved something for their efforts as they get ready for Sunday's big BetMcLean League Cup final against Cliftonville.