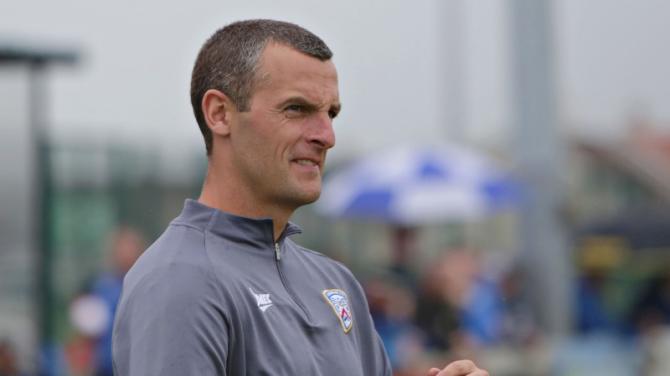 NEWLY-CROWNED BetMcLean League Cup champions Coleraine will hope to overcome Institute for the first time this season as the two sides lock horns at The Brandywell tomorrow afternoon (KO 1pm).

'Stute have been a somewhat 'bogey' team for the Bannsiders so far this campaign as the first tussle ended in a 0-0 draw back in August, before goals from Shaun Leppard and Gareth Brown sealed a 2-0 success for Sean Connor's men back in November.

However, a lot has changed since then for both clubs.

Whilst Coleraine are basking in the glory of winning the first major piece of silverware last weekend and fighting for a historic treble, 'Stute have failed to register a win in all competitions since that win against the Stripes almost three months ago.

Oran Kearney is expected to be without the services of Aaron Traynor who had to be substituted with an arm injury last weekend, as well as Ben Doherty who is still out with a hamstring complaint. However, there is positive news as Stewart Nixon can feature after being cup-tied last week, with Adam Mullan and Eoin Bradley rated doubtful.

The Bannsiders had a somewhat surprising boost last weekend as Aaron Jarvis made a return from a knee injury in the League Cup success - much to Kearney's satisfaction.

“Adam Mullan had a virus in the week leading into the League Cup final and didn’t really train, although he has been exceptional this season," he said.

“Aaron Jarvis has made unbelievable progress in coming back from injury but we felt he maybe only had 25 or 30 minutes maximum.

“We hoped the adrenaline would get Aaron through and I don’t know where he got those 70-odd minutes from.

“Aaron Traynor’s injury looks like he has banged a shoulder off an advertising hoarding, so we weren’t expecting that one but Josh Carson dropped into left-back.

“Eoin Bradley probably had 15 or 20 minutes in him for the Cup final, but because we had used two substitutes I didn’t want to risk him for our final change and possibly end up losing him."

With the Bannsiders trailing leaders Linfield by seven points - and having a game in hand - boss Kearney is hoping that his players continue the winning formula.

“Winning the League Cup needs to be that catalyst but football is too short not to enjoy this moment and everything else will take care of itself," he added last Saturday night.

“It should be a shot in the arm now to really kick on.

“I think the group has been in a really good place but the one thing that always gives players confidence is winning.

“You want a greedy bunch of players moving forward.”