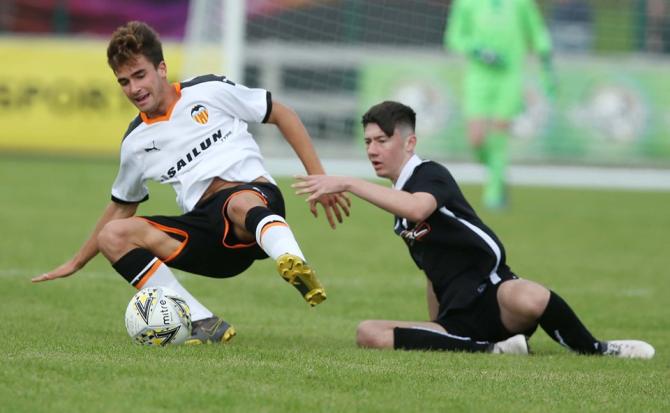 COUNTY Londonderry earned a famous scalp in the Junior Section as Corey McLaughlin's first-half strike earned them a win against English giants Arsenal at Anderson Park.

Coleraine would celebrate a local derby win in the Minor Section, with wins for Finn Harps and Dungannon United Youth who both maintain their perfect starts to the competition.

Celtic would leave it late to earn a win in the Premier Section against Vendee, but there was no such panic for Newcastle United who comfortably beat Hull City at Seahaven.

In Group A, Finn Harps continued their 100% record as they fired four goals without reply against Linfield at The University. The same can't be said for Portadown as they lost 3-1 to Ballyclare Colts at Castlerock - a second successive defeat for the Ports.

Seemingly, Dungannon United Youth have a tight grip on Group B after collecting a second win in as many days after a 3-0 success against Beijing BFA. Elsewhere, Ballinamallard responded from yesterday's defeat by inflicting a 4-1 win against Warrenpoint Town.

Group C is up for grabs as every team has three points from their opening two fixtures. Coleraine bounced back from yesterday's defeat against Global Premier Soccer as they edged out Bertie Peacocks 1-0 at the Coleraine Showgrounds. Glentoran were also victorious as they defeated Global Premier Soccer, 3-1, at Parker Avenue.

Ballymena United continue to lead Group D but they were held to an entertaining 3-3 draw with Greenisland who are in danger of losing last year's crown. Larne - who were beaten by Ballymena on the opening day - responded in fine style as they won 4-2 against Glenavon at The University.

After County Londonderry were celebrating success against Arsenal, County Antrim's dream of securing a third successive crown remains intact after a 7-0 win against County Fermanagh. However, there was no such joy for County Armagh who lost 2-0 to Dundee United, nor County Down who were beaten 4-1 by Global Premier Soccer.

Rangers were in goalscoring form as they were 6-1 victors against Bracknell Town, with Manchester United drawing for a second match in a row against County Tyrone (1-1). Furthermore, Leeds United are still waiting for their first win of the competition after a 1-1 draw against Wallsend BC.

A late goal by Owen Moffat helped Celtic to maintain their perfect record after a late 2-1 win against Vendee at Scroggy Road, Limavady. There was also a first win for Valencia as they edged out Co. Armagh by the same scoreline.

Couny Antrim made it two wins in as many games as they beat NC Elite by a single goal, County Fermanagh were also 1-0 victors against Strikers and remarkably County Down made it a hat-trick of 1-0 wins against Atlante. Unfortunately, there was a 2-1 defeat for County Londonderry against FC Edmonton, with County Tyrone drawing 2-2 against Global Premier Soccer.