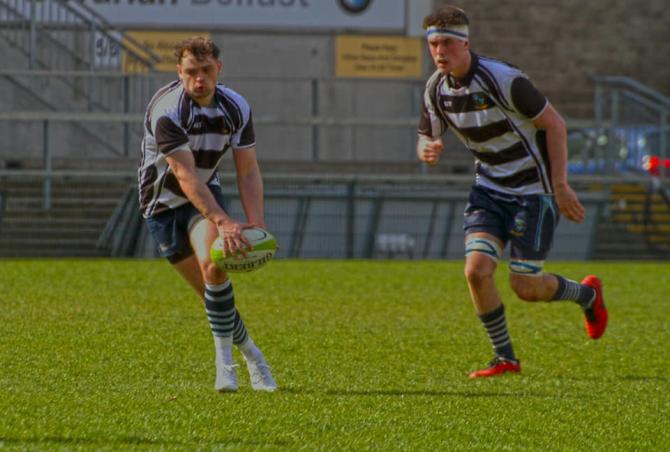 Ballymoney Fourths go on the attack during their McCambley Cup final against Dromore at the Kingspan Stadium.

AT a sun drenched Ravenhill, it was the men from Ballymoney who brought the famous McCambley trophy back to Kilraughts Road.

This, the fiftieth anniversary year of this prestigious competition.  Team Captain, Jimmy Speers, lifted the trophy to the delight of the large support who travelled down to the home of Ulster Rugby, at the Kingspan stadium to support their heroes.

Dromore started off the strongly, running hard lines at Ballymoney in the opening period and testing the defence.

The Ballymoney back row of Jason Taggart, Aaron Ramage and Sam McAuley leading the effort as the men from the toon resisted the attacks aggressively. The early pressure paid off for Dromore when their fly half slotted over a penalty goal after ten minutes.

The referee penalising Ballymoney for not rolling away in the tackle. Ballymoney responded with a Ryan Brace penalty and they moved into the lead soon after with another penalty goal by the out-half.