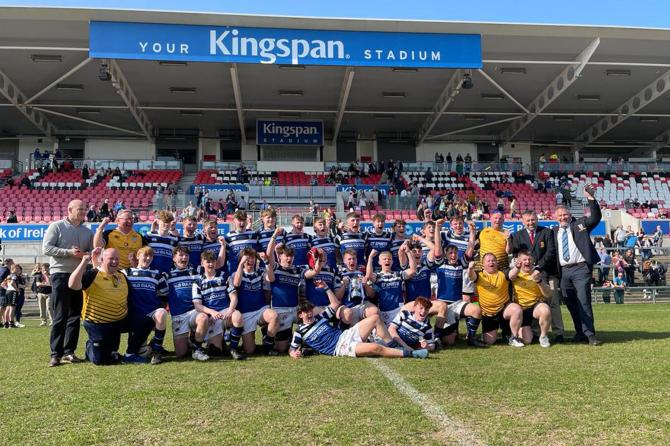 The victorious Coleraine Under-16 celebrate victory at Kingspan Stadium.

The Sandel Lodge youngsters triumphed 27-13 in front of a large travelling support at the Kingspan Stadium to make it a season to remember.

The win was all the more incredible as it was achieved without a number of key players, sidelined through injury.

For coach Neil Beddow, it was a proud day at the home of Ulster Rugby.

“To deliver a league and cup double is what this group deserves from the style of rugby that we try to play," said Neil.

“The team has faced difficulties over the last six weeks with four of our regular starters unable to make the final due to injury.

“I would like to place on record my thanks to Willie John Bradley, Brodie Stewart, Joshua Bennett and Oisin Healy and wish them all the best in their recovery from four serious injuries.

“The friendships that have been developed within this group and in rugby in general will last a lifetime.

“The performance was nervous to begin with but when the excitement of the occasion passed, the boys played an outstanding brand of rugby with three of our four tries scored by the wingers.

“I wouldn’t say it was our best performance of the season but the performance was not the most important thing," he added.

See this week's Chronicle for report, reaction and photos...