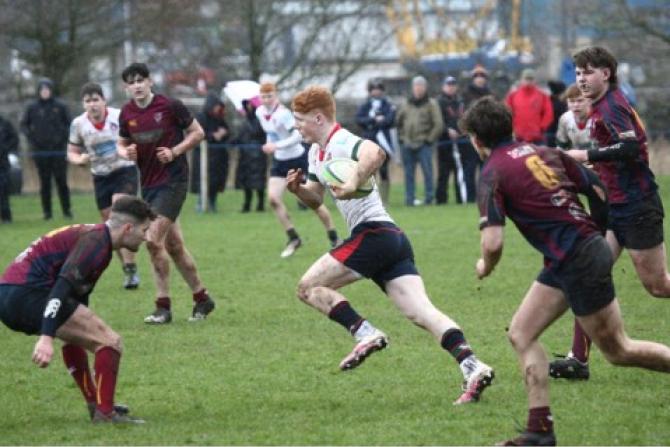 Skipper Rory Telfer will be crucial to Coleraine Grammar School's hopes on Saturday.

COLERAINE Grammar School's First XV will look to go one better than the school's Second XV when they face Royal School Armagh on Saturday.

The schools' respective second strings met in the Plate final on Tuesday with the Cathedral City college coming out on top by the narrowest of margins, 15-14, Armagh grabbing victory with the final kick of the game.

Now, the Coleraine school will look to gain revenge for that defeat and go into the weekend game in confident mood having produced some fine performances this year already.

They put up a good showing before losing out narrowly to old rivals Ballymena Academy in the Danske Bank Schools Cup in mid January.

They recovered brilliantly from the disappointment of losing that game to dismiss north west opponents Foyle College 52-0 to book their place in the Subsidiary Shield semi-finals.

Captain Rory Telfer has had an outstanding season in both defence and attack while the likes of Harry Hughes and Jacob Lennox have stood out in recent weeks and will be attacking threats for the Coleraine side.

Paddy Irwin has been the standout forward this season and will be looking for support from his pack as they try to match up physically to their opponents.

“It has been a very enjoyable season so far and the boys have worked really hard since we commenced pre-season back in May of last year," said Coleraine Grammar School coach Richard Boyd.

“The squad have had a few days off to freshen up over half term and should be primed, hungry and ready for another big week of cup rugby."