Brian Reid presented with his award by The Lord Lieutenant for County Londonderry, Alison Millar, 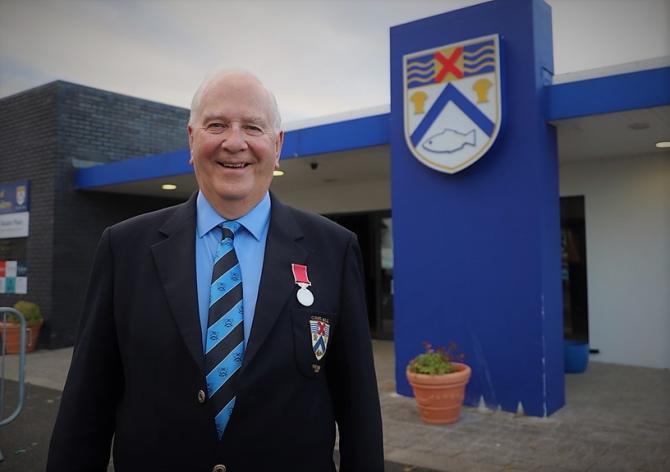 THERE was a truly unique event at Coleraine Rugby Football Cricket and Hockey Club last week.

The Lord Lieutenant for County Londonderry, Alison Millar, carried out an investiture at the Club. In the event the British Empire Medal was presented to Coleraine man Brian Reid.

Brian is currently Honorary Life President of the club and, in his time, has been President, Chairman and just about every other volunteer role in the club. He has been for many years the club Membership Secretary, no mean task in a club with over 1,000 members.

In his sporting career, Brian played for the club and went on to become a referee, officiating at many high level games.

He is also a representative for club rugby at the Ulster Branch of the IRFU and was awarded the prestigious Mr Boots award for his service to rugby in the province.

At the investiture the Lord Lieutenant commented that it was a singularly unique occasion and the first time that an investiture had been held in a rugby club.

Due to Covid restrictions there can be no garden party investitures in Hillsborough at present and this raised the opportunity for a more private and personal event.

This allowed family and a number of friends to attend the event, something that would not have been possible at Hillsborough.

The President of Coleraine Rugby Football, Cricket, Cricket and Hockey Club, Andrew Hutchinson, welcomed everyone to the event and passed congratulations to Brian on behalf of the club.