Dalriada Headmaster's XV get better of Exiles in festive clash 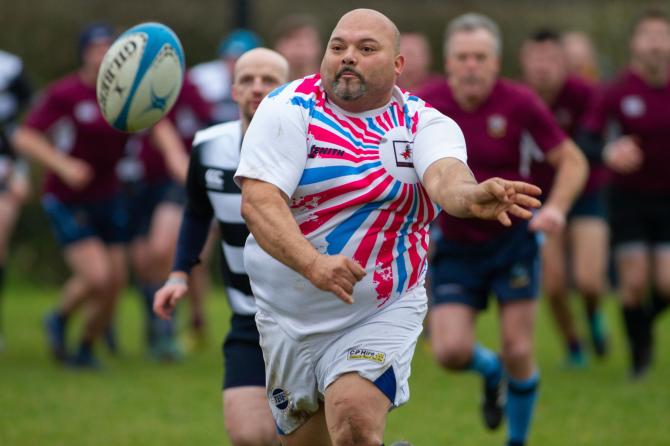 Benjy van der Byl picked up the 'man of the match' award in the annual Dalriada rugby match.

ORGANISERS of the Dalriada Headmasters XV v Exiles rugby game have thanked all those who helped make this year's such a success.

Over £1,000 was raised for charity thanks to the generosity of both teams and the large number of supporters who turned out to watch at Ballymoney Rugby Club.

"This year's total was a huge £1018.20 which again beats our target!" explained Luke Tarry.

"Cormac and I again are extremely grateful for the generosity of our supporters and proud to represent what has become an event the community looks forward to each year.

"The match itself was as dogged and fair spirited as ever with Toss Skelton's Headmasters Select XV coming out on top.

"When the final whistle blew they were 34-17 the better with notable performances coming from Ross Hunter, having scored a hat-trick, along with storming runs from Andrew Skelton and Michael Finnerty both touching down for the winners.

"Beaten but with moments of brilliance, the Exiles linked well with mentionable tries from captain Cormac McCartney and out-half Angus Johnston.

"Stalwart and crowd favourite Benjy Van Der Byl took away a well deserved 'Player of the Match' accolade for his youthful breaks and famous distribution skills.

"Special thanks go to Ballymoney Rugby Club for hosting the event over a busy weekend, John Devlin for his contribution as referee, 'Friends of Dalriada' alumni for providing refreshments after the game and all those in attendance.

"This was another great year for the event and we look forward to our fifth consecutive event in December 2020," added Luke.