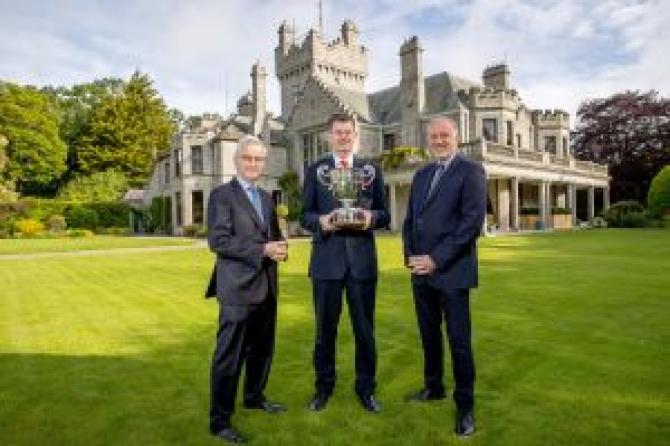 Stemming from the presentation of a specially commissioned trophy by King George V at Leopardstown during his visit to Ireland in 1911, the one mile four furlong listed race for three-year-olds was first reinstated under the Royal title in 2013 and will be run again this year at 7:20pm on Thursday June 2 for the first time since the Covid-19 pandemic.

Kirk Bloom was the inaugural winner of the race 111 years ago, with the horse’s owner, Daniel Moloney from Knocklong, Co. Limerick being presented with the Farmer’s Royal Cup by King George V and Queen Mary. With no further running of the race, the Moloney family kept and maintained the trophy through the generations, aware of its importance and value given the circumstances in which they acquired it.

Therefore, when the King George V Cup was revitalised in 2013 as a re-naming of the listed Nijinsky Stakes, the original trophy was used as a model for a perpetual one to be presented to winners on an annual basis.

British Ambassador to Ireland, Paul Johnston, said: “The King George V Cup epitomises the deep and enduring UK-Ireland connections in horse racing and equestrianism. The shared passion for horses and racing between Ireland and the UK has been a feature of many Royal visits to Ireland over the years – from King George V’s attendance at Leopardstown in 1911, through Her Majesty The Queen’s visit to the National Stud in 2011 and HRH the Duchess of Cornwall’s visit to Henry de Bromhead’s stables and meeting with Rachael Blackmore this year. It’s wonderful to see the King George V Cup being run again in Leopardstown for the first time since the pandemic, and particularly fitting on the day that the UK begins celebrating Her Majesty’s Platinum Jubilee.”

Collectively the UK and Ireland employ 100,000 people in the horse racing sector. £5 billion is the economic value of the equestrian sector in the UK, while the Irish horse racing industry contributes an estimated €1.84 billion to the Irish economy each year.

Tim Husbands, CEO Leopardstown Racecourse, commented: “We are delighted to be working with the Ambassador in reinstating the King George V race to our first race meeting of the summer series, highlighting not only the traditional close relationship between horse racing and the monarchy, but with the support of the British and Irish Chamber of Commerce, the importance of our relationships with the business community in the region.  It will be part of a great day’s racing at Leopardstown, and we hope many racegoers will come to enjoy the evening.“

John McGrane, Director General of the British Irish Chamber of Commerce, the representative organisation for two-way trade, economic and cultural relations between the UK and Ireland, said: “The British Irish Chamber of Commerce is delighted to sponsor the King George V Cup once again, a race we have proudly supported since 2013. This race epitomises the importance of the equestrian sector to both the UK and Irish economies which employ 100,000 people across the two islands, adding billions in value to both economies. Horse racing itself illustrates the important, rich cultural bonds between the UK and Ireland with thousands of race lovers traveling between the two countries on almost a weekly basis.”

Anna Taylor, Director of Communications of Kmend, noted:  "Kmend, the new resource for business opportunities is delighted to support this prestigious event as we begin to launch our new platform to connect businesses across the Irish Sea"