The remarkable mare, unbeaten in 12 starts, is bidding to win the race for a third straight year 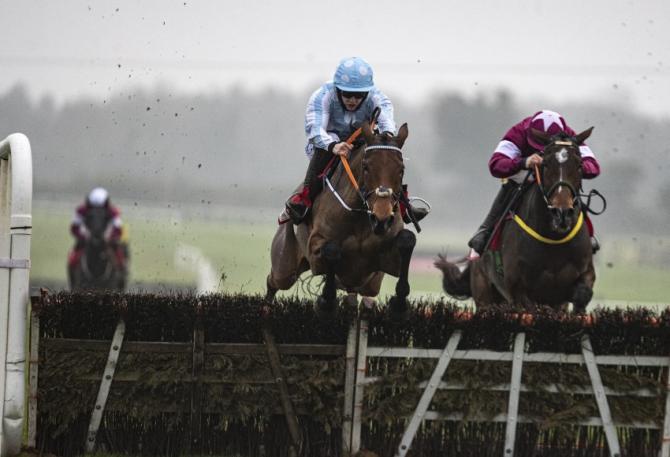 Honeysuckle heads the entries for a stellar day's racing at Fairyhouse on Sunday.

The remarkable mare, unbeaten in 12 starts for owner Kenny Alexander, Henry de Bromhead and Rachael Blackmore is bidding to win the race for a third straight year, a feat previously achieved by both Solerina and Apple’s Jade.

A trio of Willie Mullins-trained horses stand their ground, with four-time Grade 1 winner Klassical Dream, the Champion Stayers Hurdle winner at Punchestown in April, chief among them. Two-time Grade 1 winner Saldier, winner of the Guinness Galway Hurdle during the summer and more recently successful in the Grade 3 Horse & Jockey Hotel Hurdle at Tipperary could also represent the champion trainer as might the mare Stormy Ireland, another top-level winner at the Punchestown Festival last season.

Gordon Elliott trained Apple's Jade to win the race in 2016, 2017 and 2018 and he has left in both Abacadabras and the dual Cheltenham Festival winner Sire Du Berlais. Ronald Pump pushed Honeysuckle all the way to the line in last year’s renewal and he goes forward for trainer Matthew Smith while Shark Hanlon’s Skyace, winner of the Grade 1 Irish Stallion Farms EBF Mares Novice Hurdle at Fairyhouse in April, the Paul Nolan-trained Latest Exhibition, a Grade 1 novice hurdle winner at Leopardstown, Joseph O'Brien’s Darasso and Mouse Morris’ Sams Profile also remain in the race.

Twelve horses have the Grade 1 BARONERACING.COM Drinmore Novice Chase in their sights with Joseph O'Brien responsible for four, including Global Equity, a beginners’ chase winner at Galway last month, which was supplemented for the race this morning. O'Brien has also left in Busselton which added to his runaway Cork success with a second win over fences at Punchestown earlier today. Fire Attack and Midnight Run make up the Piltown quartet.

The taking Fairyhouse scorer Gabynako is there for Gavin Cromwell while Lifetime Ambition, an impressive winner at Down Royal, could well represent Jessica Harrington. Noel Meade has Beacon Edge while Cape Gentleman and Ballyshannon Rose could carry the hopes of Emmet Mullins and Paul Fahey respectively.

Gordon Elliott has left two in the race, Fury Road and Grand Paradis while Willie Mullins looks set to rely on Bleu Berry.

Mullins has won the Grade 1 BARONERACING.COM Royal Bond Novice Hurdle on eight previous occasions and he sends three horses forward for next Sunday’s renewal. Arctic Warrior, Farout and the unbeaten Statuaire are the champion trainer’s remaining entries while Gordon Elliott has whittled his initial team of nine horses down to two, Mighty Potter which made a winning start over hurdles at Down Royal and Fairyhouse winner Three Stripe Life.

A Grade 3 winner at Down Royal, Impervious is unbeaten in three starts for Colm Murphy, while the Gavin Cromwell-trained My Mate Mozzie is bidding for his third straight win after impressive displays at Punchestown and Navan. Joseph O'Brien has his exciting dual bumper winner Uhtred among the remaining nine while Emmet Mullins’ Crowns Major is another worthy of his place in the line-up after a fine win at Cork.

Peter Roe, General Manager of Fairyhouse Racecourse, said: “We are delighted to see Honeysuckle head a star-studded line up for the fixture which is regarded as the best weekend’s racing in the first half of the season, there is a great strength in depth throughout the entries on both days.

“The ground is currently good, good to yielding in places with showers forecast from mid-week on, and there will be fresh ground on each day. We are delighted with the continued support of Barney O’Hare and Bar One Racing and everyone associated with the weekend. We will have a large outdoor winter village marquee which will have entertainment and plenty of food and beverage offerings on Saturday and Sunday.”