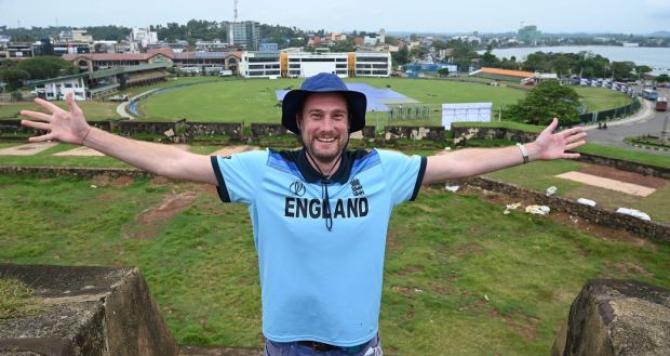 ENGLAND ‘super fan’ Rob Lewis has pledged to follow the cricket team to India after a 'magical' experience in Sri Lanka.

Lewis made the headlines this week after staying on from England’s COVID-hit tour last year to watch Joe Root’s side record a seven-wicket win over the hosts, even landing himself a personal phone call from the Test skipper.

The web designer from Sunbury-on-Thames, who decided to stay on in Sri Lanka back in March last year and wait for England’s return, was rewarded as he watched on from the Galle Fort, solely representing the thousands of England fans watching back home.

And his journey might not end there, with the 37-year-old exploring the possibility of travelling to India to follow England in their upcoming four-Test series, as opposed to returning to lockdown life in the UK.

Speaking to Cricket Bet India, from his Airbnb digs in Galle, Lewis said: “I’m looking forward to the next Test which starts on Friday and then I’ve got no plans after that. I don’t fancy going back to Tier 5 in the UK.

“England goes to India next month which is behind closed doors so that might be worth thinking about. I’m really tempted, but I think they’re really struggling with COVID. We’ll see. I’ll wait until after the next Test and make a call on it.”

However, if it were to end here, Lewis, a member of the Barmy Army, has no regrets of an amazing 10-month odyssey that culminated in him serenading the England players during the opening Test in Galle and receiving a standing ovation from the players.

“It's weird how it all turned out,” he said, speaking to Cricket Bet India.

“People make me out to be some kind of super fan. It hasn’t exactly been a chore, having to stay in an exotic country for 10 months.

“It has been a long time and I've missed family and friends which is the downside, but overall it has been amazing. Everyone back home has been really supportive and have loved it really.

“It has come around really quickly, having always been a distant dream.

“I’ve been busy getting the giant banners designed and printed. I’ve been working with England’s Barmy Army and WECare to set up a donation campaign for the ‘Buy A Pup A Pint Appeal.' Obviously I am still holding down a full-time job and sorting out accommodation.

“The last few days have just been surreal and a blur and it’s not been helped by the fact we’ve been boozing most nights as well. Going to bed late and getting up early wears any man down.

“I didn’t know if it was going to happen. I didn't know the rules or if anyone would even be there. There’s obviously a few expats milling around, so there are a few others here to watch England.”

It was worth the wait for Rob, as he was the only ‘away’ fan to witness a fourth away win on the bounce for England, in an impressive win over Sri Lanka. Root made a fourth double century in Test cricket before raising his bat in Rob’s direction and speaking over the phone at the end of the game.

“There isn’t a word to describe it,” he ponders, when trying to sum up THE moment.

“It was just super magical. I’ve been in crowds when players turn and salute them and there’s thousands clapping.

“But when it’s just me, he’s doing it directly to just me, it’s just ridiculous when you think about it. It’s mental. It meant a lot, it really did. It made everything and all the hardships I went through worthwhile.

“I can’t think of another time when the captain of a team has come out and called a fan. It’s just amazing and it’s an incredible gesture. He came all the way over to the far side, to give me a personal phone call.

“He was just thanking me for being there and I congratulated him on his double ton and told him he made my day when he saluted me.”

It hasn’t all been plain-sailing, however.

It all started when he boarded a flight bound for the Indian Ocean island country last March, only to learn, as the plane taxied to the runway, that England’s tour had been called off due to the global pandemic.

Instead of jumping on the next flight back, the 37-year-old vowed to remain in Sri Lanka until the England side returned to fulfil the fixtures. The crucial piece of the jig-saw in all of this? His laptop.

“I checked the news and it wasn’t good,” he said, with his phone plugged in and charging, due to the volume of incoming calls and messages. “It was actually one of the last events to be cancelled due to COVID.

“There was always an air of inevitability about it.

“I read up on COVID and realised it was better that I didn’t move around and didn’t fancy getting on a flight with a big visor, so I stayed thinking it would be a month or so (laughs).

“Sri Lanka had a curfew for one or two months and then it opened up, but the situation around the world hasn’t been great, especially back in the UK.

“It was quite an easy decision to stay and I formed the idea that it would be quite funny if I was still here in January, when the proposed return of England would be.

“The biggest factor was that I had my laptop with me and I’ve been able to work remotely.

“I’ve been quite fortunate in that respect. My boss is pretty supportive. He’s a legend himself and is pleased that I’m doing this.

“Seeing events unfold, I didn’t want to come back home because the government has made a bit of a shambles out of COVID, Brexit and everything, so I thought it would be cool to just hang out here.

“It was also nice to experience Sri Lanka when there’s not many tourists around. I’ve been to some of the beaches where normally there’s not enough space to put a towel down and I’ve had the whole beach to myself, which has been quite surreal and quite a unique experience.”

So every cloud does have a silver lining, and a lack of tourists has allowed Rob to take advantage of reasonably priced accommodation - affording him the luxury of places usually out of his price range. And who would begrudge him that!? His cobbled together itinerary has seen him spend time in Hirikatu, Columbo and Arugam Bay, staying in villas, hostels, Airbnbs and hotels.

What transpired was a personal adventure of a lifetime. He adopted a street dog named pup, started a fundraising campaign, became a DJ under the alter ego DJ Randy Caddick (a nod to former England quick Andy Caddick) and even forged friendships with the Sri Lankan cricketing hierarchy.

That’s how he busied himself during a 10-month wait for wickets - a long time between drinks!

“I’m pretty fearless when it comes to travel,” he continued. “I’m happy to just jump on a plane and not have anything booked.

“I did go to the Rugby World Cup final in November 2019, a week after knee surgery and having bought flight tickets drunk. I didn’t even have tickets for the game, I had to sort them out once I was over there. I was on crutches, hobbling around Tokyo.

“This has been the wildest ride so far. So over those 10 months I had some great experiences regardless of the cricket.”