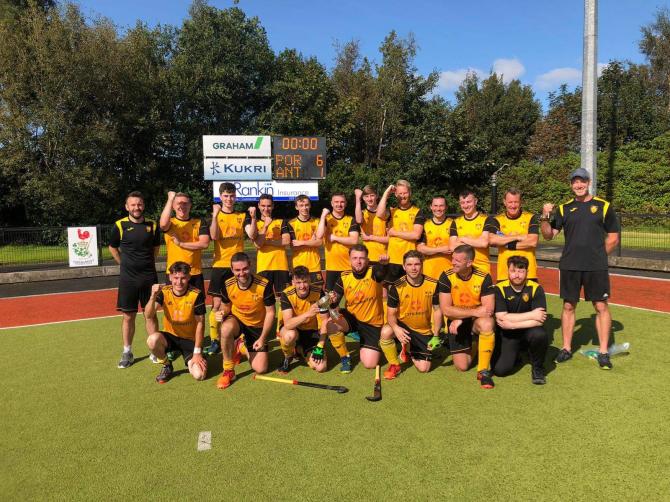 PORTRUSH began the charge of their first Irish Cup since the 1960’s in an aggressive and energetic style in Lisnagarvey on Saturday lunchtime as they faced Antrim Hockey Club in the Irish Challenge Cup final.
A largely uneventful first 10 minutes of the game as both sides fluttered their feathers in a bid to find the opening goal of the game with Portrush using the ball in more threatening areas as opposed to Antrim maintaining the ball in less dangerous positions of the pitch.
As the first quarter of the game began to fizzle out, it took Portrush to break the deadlock as Ally Reilly prodded home at the back post after some fantastic work through the middle of the pitch from Mickey Conway, collecting the ball from midfield and interchanging possession with Leon Smith to find Ally with a pinpoint pass.
As Antrim had shown that they could be dangerous when they had periods of possession of the ball, it was ultimately proven insignificant as Portrush stepped up another gear at the beginning of the second quarter.
The second goal of the game came quickly after the restart as Mickey Conway intercepted a pass from an Antrim player on the left hand side of midfield, beat a man and swept the ball out right to Jack Price who carried the ball down the right to Leon Smith, returning the ball to Mickey Conway at the edge of the D for him to find the bottom right hand corner of the net with a fantastic drag flick finish.
Portrush began to dominate the game in all areas, fantastic possession on the ball in the final third led to their third goal of the afternoon, who this time came from Adam Scott.
Some lovely interchanging of passes from Andy Christie and Gareth McGreevy led to Gareth picking out Adam Scott with a strong slap shot pass for Adam to deflect over the Antrim ‘keeper and into the back of the net.
Portrush swiftly made it 4-0 in a matter of minutes when a succession of long corners led to large periods of possession of the ball.
With some really sharp hockey from Jack Price and Aaron Kerr found Gareth McGreevy in a pocket of space in the far right of the D, where he hit a powerful drive to which the ‘keeper proved too hot to handle and knocked into the middle left of the net.
Astute defending across the Portrush backline of Andy Christie, Graeme Christie, Brent Smith and Owen Farrell meant that Portrush entered the half time break 4-0 up and cruising.

The second half began and it was Portrush who were on the backfoot as Antrim found the net from a short corner.
Matt Jordan, the Portrush number one, had found himself rarely kicked into action in the first half made a smart safe from the Antrim straight shot at the top of the D from the short. However, the ball dropped fortuitously for the Antrim centre forward as the ball dropped for a tap in to an empty net.
The third quarter saw some lovely possessional hockey from Portrush who had found themselves unlucky not to improve their lead.
Some great efforts from Leon Smith, Ally Reilly and a fantastic save from the head of the Antrim goalkeeper to deny Adam Scott from his second of the game with his reverse stick shot heading into the roof of the net if it wasn't for the helmet of the Antrim shot stopper.
Some strong performances in the third quarter from Craig Henry, Graeme Kerr, Ryan Smith and Robin Morrow prevented any sniff of another Antrim goal.
Entering the final quarter, the possession, fitness and quality on the ball of Portrush started to show as chances were becoming more and more frequent.
The outballs from the left-back and right-back union of Andy Christie and Owen Farrell and slap pass distribution of Brent Smith and Graeme Christie in the middle created some lovely interchanges in the middle of the pitch and forward line.
These smart interchanges led to the fifth goal of the day for Portrush and it came from Leon Smith from a goalmouth scramble after a couple of attempts at goal from Ally and Gareth found Leon in space with the predatory instincts to slap the ball into the net.
With the growing desire to wrap the game up, Portrush overcommitted a couple of times and it led to Mickey Conway and Andy and Graeme Christie taking a seat on the naughty seat for a few minutes for a couple of mistimed tackles.
When restored to a full complement of players, Portrush made it 6-1 with Owen Farrell completing a quality assist for Leon Smith at the back post to find the net and secure the Irish Cup returning to the North Coast for Portrush Hockey Club.

* Keep up to date with all the latest hockey news in The Chronicle, out Tuesday morning...