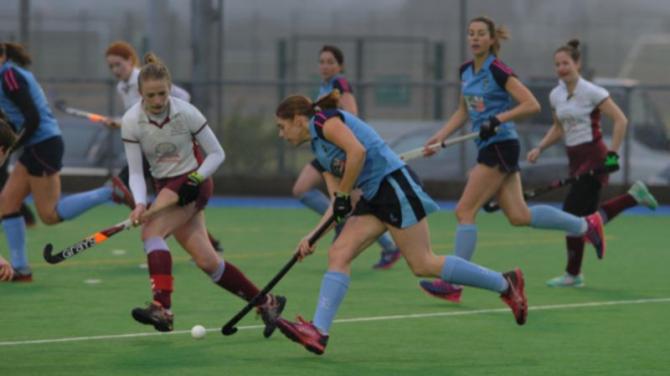 ON SATURDAY Ballymoney 1st XI, sponsored by John McElderry, played in the second round of the Irish Senior Cup.

The Ballymoney ladies were involved in a massive draw against IHL team Loreto who have been playing really well so far this season boasting Irish Senior International players and Irish U23 players but as always Ballymoney rose to the challenge.

Ballymoney were without three regular starting players but the girls had the boost of Irish captain Katie Mullan returning to the side.

The game started off at a fast pace in front of a large crowd of supporters and Loreto were indeed a very slick side but Ballymoney took to the challenge well. The Ballymoney defence were put under extreme pressure during the match with goalkeeper, Meghan Doey, pulling off some top drawer saves in the opening minutes.

Loreto’s pressure paid off as the visitors got their breakthrough on fifteen minutes, cooly scoring from close range.

Ballymoney searched for an equaliser and the whole team worked tirelessly to create opportunities at one end as well as showing their defensive exploits to thwart Loreto’s attacks at the other. The visitors won several shot corners in the first half but these were ability dealt with by the staunch Money defence.

Ballymoney were dealt a further blow when LJ Kernohan accidentally head butted a high ball and ended up with a broken nose for her trouble, here's to a speedy recovery panda.

As Ballymoney pressed forward looking for their equaliser, Loreto got a break and Doey was left stranded when Loreto pulled her out of position allowing the visiting attackers to convert as the ball was slapped home by Evans at the far post.

The home side showed showed their resilience and with nine minutes remaining they were awarded a short corner which was hammered home by Olivia Mullan. The never say die attitude of the Ballymoney Ladies prevailed once again and they fought to the final whistle for an equaliser, but to no avail.

With Loreto sitting mighty in the IHL and with so many representative players, on paper the result should have been a fore gone conclusion but Loreto must have breathed a sigh of relief when the final whistle went knowing that they hadbeen involved in a tough battle.

Ballymoney return to the Denman Ulster Shield on Wednesday with a home game against Lisnagarvey at 8pm. Ballymoney Ladies Hockey Club extended their thanks to Liam and Bridget Kearney for sponsoring the match ball, to the fantastic supporters and, as always, coach Fairmann. A special mention was extended to Ballymoney Football Club for providing the hospitality after the match.