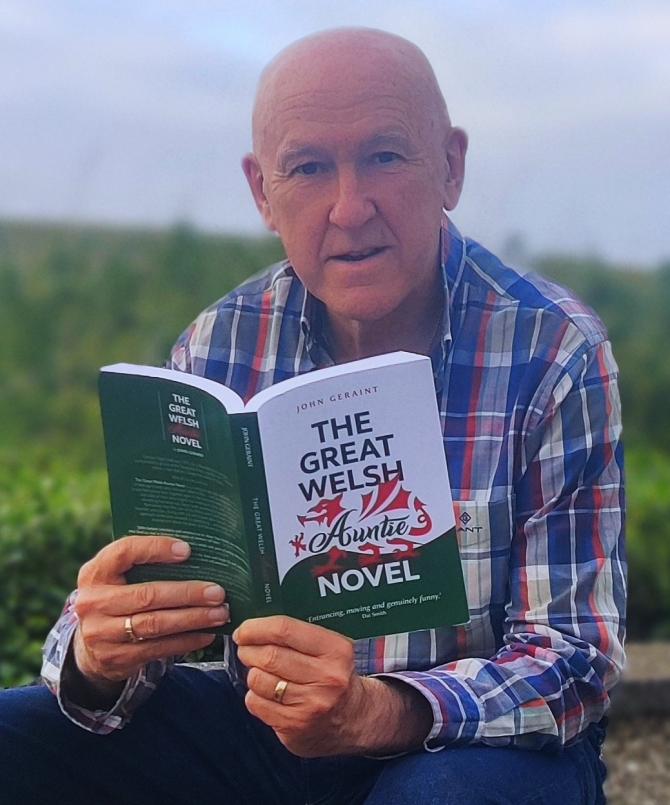 BALLYCASTLE resident John Geraint Roberts has just published his debut novel.
The Welshman, writing as ‘John Geraint’, has embarked on this new line of work after a long and successful career as a documentary filmmaker.
The Great Welsh Auntie Novel is set in the Land of his Fathers, but John says that his literary endeavours owe a great debt to Ballycastle.
“Most of the writing was done here during the last two years,” he says. “The first lockdown in particular – when we couldn’t travel or socialise – gave me the peace and quiet to write. Walks on the strand, the Warren and up the glen were a real source of inspiration.”
A writer also needs distance from his subject, and the North Coast certainly offered John that. It’s hard to imagine anywhere so different from the grimy industrial Valleys of south Wales where he grew up.
“But Ballycastle also has something in common with the Rhondda,” says John. “And it’s this: a real sense of community. People here feel connected, they know their neighbours, and take an interest in them, just like they did in the coal-mining towns of my teenage years.”
The Great Welsh Auntie Novel is a tender exploration of first love, lust and loss, set in the Rhondda Valley in 1974. It’s also laugh-out-loud funny. And it’s already attracted glowing reviews from distinguished historians, and other novelists and critics.
“The title itself is a joke, a pun,” explains John. “Those of us brought up in the Valleys in the 1960s and 70s had dozens of Aunties, very few of them actually blood relations. But a ‘anti-novel’ was a fashionable term in the 1970s for a book that rips up all the usual conventions and tells the story in its own weird way instead.”
That’s certainly true of John’s book. Centre stage is Jac, a painfully thin 17-year-old with delusions of grandeur and a romantic obsession with the past.
Jac has a Secret, a Big Secret, which gets him into – and out of – trouble, and sets him off on a roller coaster ride up and down the Valley, while the fate of the nation is decided on Election Night, February 1974.
Jac’s odyssey catapults him into imaginary encounters with heroes from two millennia of Celtic history – everyone from King Arthur and Boadicea to Henry Tudor and Lloyd George. Jac even gets to write a rock-opera with Don McLean.
But there’s another strand to The Great Welsh Auntie Novel – the story of ‘The Novelist’ himself, the writer who is struggling to get this tall tale down on paper half-a-century later.
John Geraint’s own career took him from Wales around the globe to work for major international broadcasters like National Geographic, the History Channel and France Télévisions, as well as BBC, ITV, Channel 4 and S4C.
“But there’s nowhere on earth quite like the North Coast here,” says John. “For an artist, every day here is an invitation to create something as beautiful as the natural splendour that surrounds us.”
The Great Welsh Auntie Novel by John Geraint is published by Cambria Books.
It’s available from cambriabooks.co.uk and all good bookshops