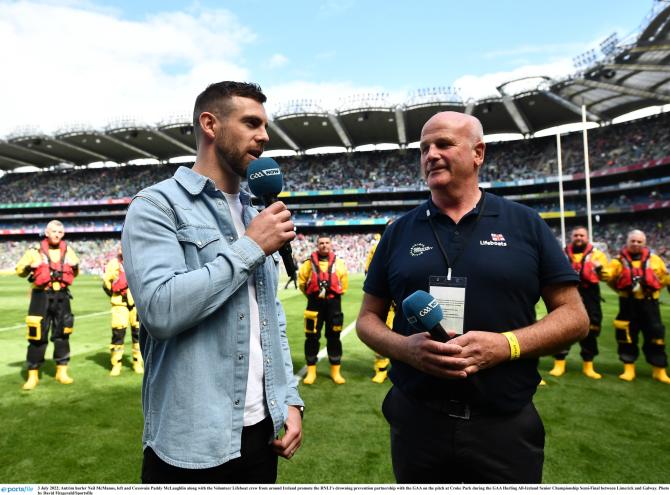 Paddy McLaughlin on the pitch in Croke Park on Sunday

Before Limerick and Galway battled it out for a place in the final and in front of a packed stadium and TV audience, RNLI volunteers, dressed in their full kit, unfurled a giant flag showing an all-weather lifeboat in action.

Alongside this activity, pitch-side interviews were done by RNLI Coxswain and Trustee Paddy McLaughlin, Antrim and Ruairí Óg hurler Neil McManus and the RNLI’s Head of Water Safety Gareth Morrison, who all shared water safety advice and highlighted the importance of the work of the partnership.

Flanking the tunnel where the players came onto the pitch were RNLI lifeboat volunteers, who stood alongside the team captains for the coin toss ahead of the match.

The RNLI and GAA water safety partnership was established in 2017 to raise awareness of drowning prevention and to educate communities on how to stay safe in and around the water.

The partnership is part of the GAA Healthy Clubs’ programme and has seen RNLI lifeboat crew visiting GAA clubs around Ireland to deliver water safety talks to all age groups. Within a 10km radius of the 46 RNLI Lifeboat Stations on the island of Ireland, there are 333 GAA clubs.

From the first year of the partnership, the GAA have invited the RNLI to Croke Park for an All-Ireland Semi-Final, where the charity has reached new audiences that may someday save a life themselves with water safety advice.

Speaking about the day, Red Bay RNLI Coxswain Paddy McLaughlin said: "Our volunteer lifeboat crew in Cushendall recently saved the life of a swimmer who was moments from drowning and brought a rowing crew to safety in very challenging conditions.

"All our crew are made up of people living locally and caring passionately about their community, who will drop everything and launch our lifeboats. "However, seconds count and people need to know what to do if something happens to them in the water. To be able to give a water safety message in front of so many people is an incredible opportunity. We are bringing lifesaving advice to a huge audience, which could one day save a life."

Commenting on the partnership and his role in it, Antrim Hurler Neil McManus said: "I am proud to have been involved in this partnership from the beginning. Growing up in Cushendall, the sea is on our doorstep and there are more people using it and enjoying it, all year round.  In our community, the lifeboat station and the GAA club are next to each other, and you see the shared values of volunteerism and pride in where you live. I know we can save lives in sharing this advice and I hope we can bring more people with us as we do it and make everyone a lifesaver."