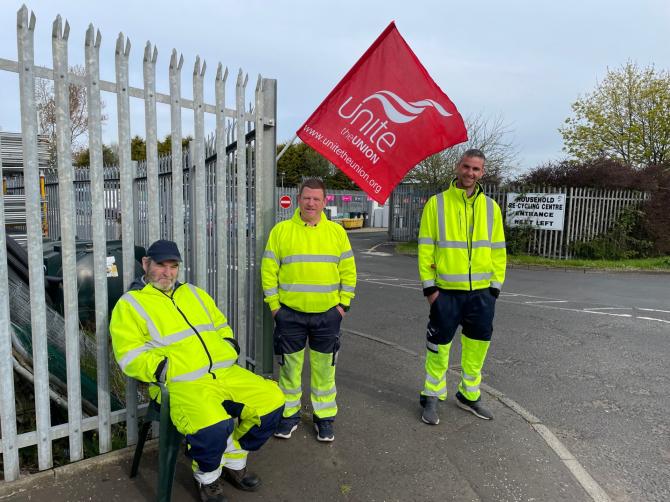 UNITE workers were outside the Causeway Coast and Glens Borough Council facility on Knock Road Ballymoney again this morning as part of a two week 'discontinuous strike' that started at midnight on Tuesday 26 and will go on, if unresolved until May 10.

UNITE say the strike is the result of the failure of employers to provide an improved pay offer to workers.

“The increase offered under the National Joint Council amounts to 1.75 per cent. The current rate of inflation impacting workers’ living standard is nine per cent." the union says.

Unite general secretary Sharon Graham offered her union’s support to the workers taking further strike action in Northern Ireland saying: “The offer of 1.75 per cent is completely unacceptable – it’s a huge wage cut. All workers have a right to expect pay to keep pace with inflationary pressures and it’s appalling that public sector workers face a choice of heating or eating.

“Workers out on pickets in Northern Ireland are demonstrating their determination to secure real improvements. They have my complete support and that of everyone in Unite.”

Regional Officer for Unite, Gareth Scott laid the blame for the continued strike action at the feet of employers:  “These workers took a powerful first week of strike action only a matter of weeks ago. They also gathered in large numbers at Stormont to highlight their determination to defend themselves from the cost of living crisis.“These employers need to address the pay expectations of their workforce. Their failure to do so to date has led to this escalation and the unnecessary disruption that will inevitably result.”

A discontinuous strike, is one where strike action will only take place on selected days during the two week period.

CC&G warned householders no bin collections are guaranteed, during this period. “While no bin collections can be guaranteed during the strike period, residents are asked to leave their bins out for collection on their normal day and they will be emptied where there are sufficient crews to deliver a service,” said a council spokesperson. Leisure Centres may also be affected and the Housing executive has warned of disruption to its scheduled repair service in Coleraine. The council has asked residents to check social media for updates.

“We recognise the continued adverse impact of Unite The Union’s actions and we want to reassure residents and customers that full service provision will resume as soon as possible,” said the spokesperson.