Collusive behaviours but no prior knowledge of attacks: Ombudsman

Report examines the RUC's handling of paramilitary attacks by the UDA/UFF, including the Greysteel massacre 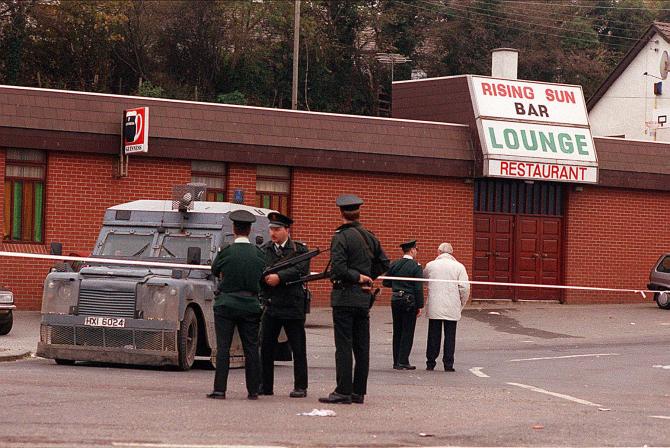 Eight people lost their lives following a gun attack at the Rising Sun bar in Greysteel in October 1993.

THE Police Ombudsman has published a report into the RUC's handling of a four-year UDA/UFF killing spree between 1989 and 1993 which resulted in 19 murders and multiple attempted murders.

The Ombudsman has identified collusive behaviours and raised significant concerns about police conduct. All but one of the attacks took place in the north west.

They included the murders of four people at Castlerock on 25 March 1993 and a gun attack which claimed the lives of eight people at Greysteel on 30 March 1993.

One of the attacks, the murder of Sinn Fein councillor Eddie Fullerton, took place in Co. Donegal in May 1991.

Mrs Marie Anderson reported that her investigation found no evidence that the RUC had any prior knowledge of the attacks.

She stated that an initial failure by the RUC to ensure that it had adequate intelligence about the activities of the North West UDA/UFF led to an inability 'to effectively counteract the threat posed by them which began to emerge in 1989.'

After investigating police actions in relation to these attacks, Mrs Anderson said her enquiries had identified a number of significant concerns and said she was of the view that the families concerns about collusive behaviours were legitimate and justified.

- Intelligence and surveillance failings which led to the arming of the North West UDA/UFF with military assault rifles.

- Failure to warn a number of individuals of threats to their lives.

- Deliberate destruction of records relating to informants who were suspected of having been involved in serious criminality including murder.

- Failure to disseminate all relevant intelligence to police officers investigating a number of the attacks.

- Failures in the use and handling of informants suspected of being involved in serious criminality including murder.

However, she also stated that, generally, police investigations into the attacks were ‘prompt and thorough’ resulting in a number of convictions of those responsible for the attacks.

The investigation identified a number of instances where RUC Special Branch had obtained information from informants which ‘impacted upon the effectiveness of the UDA/UFF as a terrorist organisation and may have saved lives.’

One was suspected of passing sensitive information to loyalist paramilitaries, the other of failing to disclose in a file to the then Director of Public Prosecutions that a suspect was also an informant. The PPS directed that neither officer should be prosecuted.

The findings are contained in a 336 page report following a complex and lengthy investigation.

"The Police Service of Northern Ireland now have greatly improved policies and procedures which guide our response to potential threats and how we approach criminal investigations and the management of intelligence.

"These policies and procedures are firmly embedded in principles of the Human Rights Acts 1998. We welcome the fact that the Ombudsman has recognised these positive developments in her report.

"The Police Service of Northern Ireland remains firmly committed to bringing those responsible for these murders to justice.

"We appeal to the community for information that will assist our Legacy Investigation Branch detectives in their investigations," he added.

The Police Ombudsman’s investigation examined police actions in relation to a total of 19 murders and multiple attempted murders. These were:

3. The murder of Patrick Shanaghan at Castlederg, County Tyrone, on 12 August 1991;

4. The murder of Thomas Donaghy, at Kilrea, County Derry/Londonderry, on 16 August 1991;

5. The murder of Bernard O’Hagan at Magherafelt, County Derry/Londonderry, on 16 September 1991;

6. The attempted murder of James McCorriston at Coleraine, County Derry/Londonderry, on 14 February 1992;

7. The murder of Daniel Cassidy at Kilrea, County Derry/Londonderry, on 2 April 1992;

8. The attempted murder of Patrick McErlain at Dunloy, County Antrim, on 28 August 1992;

9. The murder of Malachy Carey at Ballymoney, County Antrim. Mr Carey was shot on 12 December 1992 and died the following day as a result of his injuries;

10. The murders of Robert Dalrymple, James Kelly, James McKenna, and Noel O’Kane at Castlerock, County Derry/Londonderry, on 25 March 1993. A fifth man, Gerard McEldowney, was seriously injured in this attack;

* Much more on this developing story in Tuesday's Chronicle newspaper...