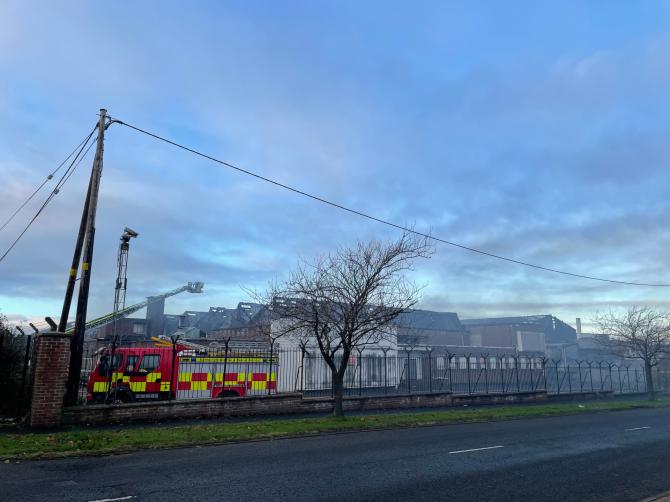 The scene at Fleming Poultry this morning.

MOST of Ballymena Road, Ballymoney, remains closed as firefighters continue to monitor the smouldering remains of the old Fleming Poultry factory, after a huge blaze has gutted the complex of buildings.

The fire broke out late yesterday (Mon 22 Nov) afternoon, with over 100 firefighters from as far away as Belfast, spending the night trying to bring the blaze under control.

The Northern Ireland Fire and Rescue Service (NIFRS) declared a major incident with the Ballymena Road between Supervalu roundabout and Riada Avenue quickly closed off by police officers.

There were spectacular scenes visible from Garryduff Road of a fire appliance ladder at full extent, shooting a thick jet of water into the flame

Thick black plumes of smoke billowed from the large site, with one person on social media saying the flames were visible from Dervock.

Thankfully the many buildings of the factory complex were derelict and there are no reports of any injuries.

Due to the magnificent efforts of fire crews the fire did not spread to neighbouring factories and businesses.

“Currently over 100 Firefighters, including 9 Officers, 15 Pumping Appliances and 10 Specialist Appliances are on scene dealing with the incident.

“NIFRS has declared this a ‘Major Incident’ and has put arrangements in place to maintain emergency response cover across Northern Ireland.

“NIFRS is asking local residents to remain in their homes and to keep doors and windows closed.

“The cause of fire is under investigation.”

This morning, the blaze seemed to be under control, but many fire fighters and appliances remain at the scene.

The Ballymena Road between Supervalu Roundabout and the lower side of Maine Minerals remains closed.

Chronicle understands it could remain closed for up to 24 hours as fire fighters continue to monitor the site and conduct their investigations.

Police say, “Motorists are advised to seek alternative routes, and anyone living nearby is asked to keep their doors and windows closed.”