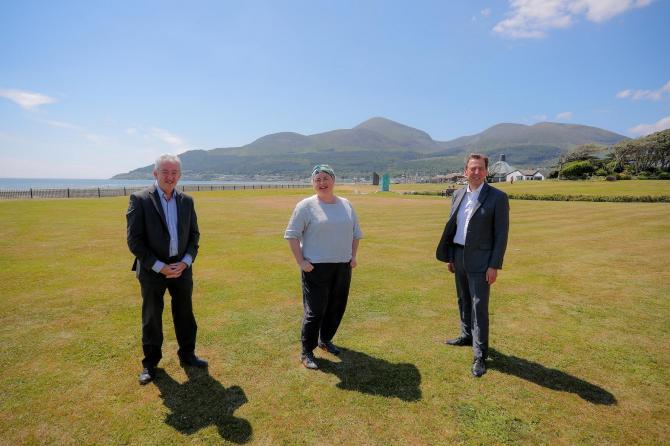 IMAGES of our breathtaking coastline and countryside will be beamed into homes across Great Britain when a new series – fronted by Derry Girls actress Siobhán McSweeney – begins on More4 on Thursday (August 12).

The first episode in the four-part series called 'Exploring Northern Ireland with Siobhán McSweeney,' will follow Siobhán as she travels around county Down on her electric bike – taking in the Saint Patrick's Way through Downpatrick and Saul and visiting Castle Ward.

Viewers will also see her checking out some of Belfast’s best-known sights – including the Harland & Wolff cranes, Belfast City Hall, Queen’s University and the Lyric Theatre – and meeting up with artist Colin Davidson in his studio.

In the following three episodes viewers will see Siobhán explore Armagh city, the Mourne Mountains, the Giant's Causeway, Seamus Heaney HomePlace, Rathlin Island, Derry’s city walls (including, of course, the iconic Derry Girls mural), as well as Fermanagh and the Sperrins. The series was devised by Waddell Media, a Belfast-based production company and supported by Tourism Ireland and Tourism NI.

"With many people across GB set to watch the series on More4, it’s a great way to shine a spotlight on Northern Ireland – highlighting our spectacular scenery and the many things for our visitors to see and do here. It will remind GB viewers that Northern Ireland is the perfect destination for a short break or holiday.”

"Northern Ireland has something to offer everyone, from our world-class visitor attractions to our stunning landscapes, top class accommodation and fantastic food and drink offerings. Viewers will have the opportunity to see what makes Northern Ireland such a compelling place to visit.”

Publicity and broadcasts like this are a key element of Tourism Ireland’s programme of activity, to keep Northern Ireland front and centre in the minds of future visitors in GB and elsewhere around the world.