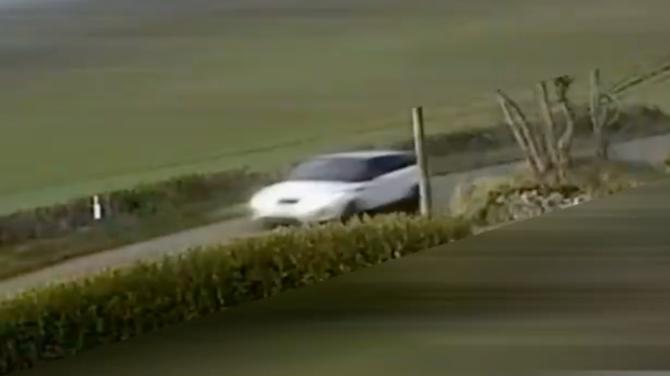 DETECTIVES investigating a car set on fire and abandoned on railway tracks in Limavady earlier this year are making a specific appeal as part of their ongoing enquiries.

Detective Inspector Peter McKenna said: “We continue to conduct an extensive investigation into the circumstances surrounding this incident, which could have resulted in tragedy and loss of life.

"At around 9pm on Monday 12th April, a vehicle was set alight and placed on railway tracks. This reckless act caused an approaching train to make an emergency stop. The swift actions of the driver certainly avoided death and serious injury, for those on board the train.

“As part of our investigation, we are appealing for information in relation to a vehicle we believe can assist with our enquiries.

"Today (Friday 9th July), we are releasing CCTV footage and are particularly keen to speak with the driver of a white coloured Range Rover Evoque that was seen in the area of Limestone Road at the time of the incident.

“The traumatic events in April have left a lasting impact on not only those on the train, but those within the local community. There has been widespread outrage regarding this mindless incident, and we thank everyone for their assistance and cooperation so far with our investigation.

“This renewed appeal for information, in which we are trying to trace the movements of this vehicle, is of vital importance to help bring those responsible to justice.

“The independent charity Crimestoppers has offered a reward of up to £3,000 to anyone providing information directly and anonymously to Crimestoppers which leads to the arrest and conviction of any person or persons linked to this incident. We are very grateful for their cooperation as part of this investigation.

“If anyone saw this white Range Rover Evoque in the Limestone Road or surrounding area at the time of the incident, we would ask them to contact detectives on 101, quoting reference number 1945 12/04/21. If anyone has dash-cam footage taken between 8pm and 9:30pm on Monday 12th April when travelling along the Limestone Road, this would also be extremely helpful for our enquiries.

“Alternatively, to stay anonymous, contact the independent charity Crimestoppers on freephone 0800 555 111 or complete their simple and secure anonymous online form at crimestoppers-uk.org."