Coleraine rower will compete at Olympics 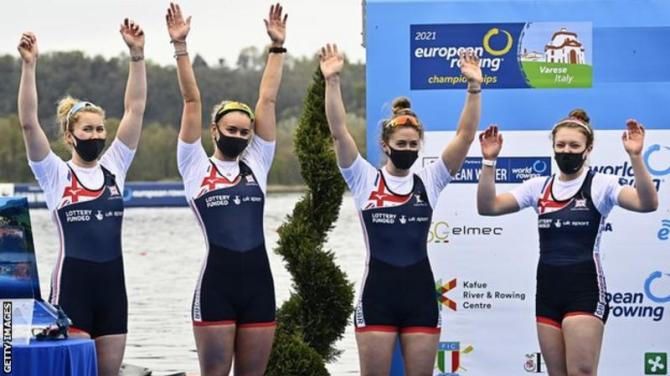 Hannah Scott (left) and her team-mates celebrating their silver medals at the European Championships earlier this year.

COLERAINE rower Hannah Scott has been included in the 45-strong Great Britain rowing team which will compete at this summer's Olympic Games in Tokyo.

Scott (21), a member of the famed Bann Rowing Club, is one of 24 women and 21 men named by the British Olympic Association on Wednesday.

The Princeton University student will be joined by Mathilda Hodgkins-Byrne, Charlotte Hodgkins-Byrne and Lucy Glover in the women's squad (W4x).

And they will travel to Japan full of confidence, having won silver at the European Championships in Italy earlier this year.

The only downside - so far as the athletes are concerned - is that family and friends will, in all likelihood, be unable to travel to support them.

Hannah's inclusion in the GB Olympics team conjures up memories of London 2012, when Alan Campbell alongside brothers Peter and Richard Chambers captured the province's attention.

All three returned home to Bann with medals - Alan winning a bronze in the single sculls and the Chambers siblings claiming silver in the men's lightweight fours.

The hope now is that Hannah can replicate their success at an Olympic Games which promises to be like no other.

“When we qualified our ten boats for the Olympic Games back in September 2019 we had no idea of the challenges that would lie ahead," admitted British Rowing Director of Performance Brendan Purcell.

"We used the lockdown time away from competition to focus on ourselves and individual development. Since then, the group have thrived, topping the medal table at both the 2021 Europeans and the World Rowing Cup II.

“Obviously, this Olympic Games will be a totally different experience with it being the first time in over two years we’ll be competing against many crews from the rest of the world.

"We don't have a real form line on them but we believe in the work we are doing and the results of our own performances and it’s a great opportunity for the coaches and athletes to go out there and write a unique chapter in the legacy of the British Rowing team in this unique year," he added.

Hannah Scott, one of 37 debutants on the team, will be looking to draw on the experience of colleagues, such as two-time Olympian Helen Glover, later this summer.

"For most of the team, Tokyo will be their first taste of Olympic competition and I am sure they will look to draw on the experience of the eight Olympians named in the squad," said Mark England, Team GB Chef de Mission.

“The team has had some promising results in recent weeks, topping the medal table at the European Championships and World Rowing Cup II, and I am sure they will relish the opportunity to show their form as they race the Olympic course at the Sea Forest Waterway in Tokyo Bay in July.”

* Much more on this developing story in Tuesday's newspaper.