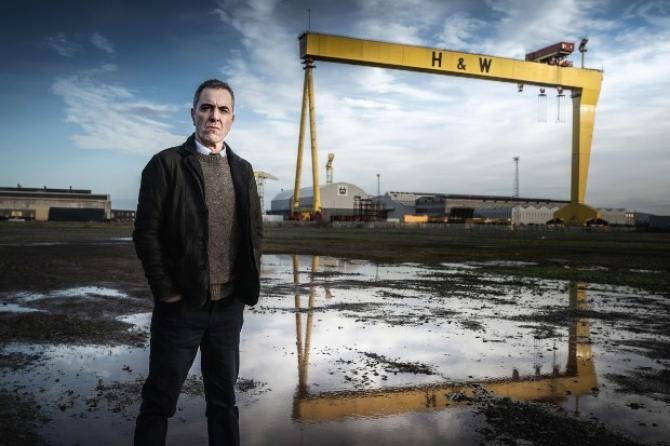 ‘Bloodlands’ begins this Sunday night and Nesbitt plays Detective Inspector Tom Brannick gong on the hunt for a mythical assassin in 'an infamous cold case with enormous personal significance,' according to the BBC.

The major new original crime drama has been created by writer Chris Brandon and produced by HTM Television.

When a car containing a possible suicide note is pulled out of Strangford Lough, DCI Tom Brannick quickly connects it to an infamous cold case with enormous personal significance. It follows his dogged hunt for a legendary assassin, an explosive cat-and-mouse game where the stakes have never been higher.

Produced with funding from Northern Ireland Screen, filming took place in and around Belfast and Strangford Lough early last year.

Writer Chris Brandon explains: “I wrote a speculative screenplay and was delighted when my agent brought it to the attention of Jed Mercurio. His experience of working in Northern Ireland, while filming Line of Duty, gave him an intimate knowledge of the place I was writing about.

“His knowledge of the thriller genre was something I was already aware of as an avid follower of his work and it has been a great privilege to discuss the intricacies of story with him.

“Together with executive producer Mark Redhead, whose own experience of working in Northern Ireland on projects such as ‘Bloody Sunday’ had given him an exhaustive knowledge of the Troubles, we were able to collaborate on building a storyline across four hours that could be both a thrilling and resonant drama.

“James Nesbitt’s involvement from early on and his belief in the project marked the coming together of something very special. He is a much loved son of Northern Ireland and has those rare and timeless qualities of the everyman that allow him to take an audience by the hand and lead us into perilous territory whilst always maintaining our trust.

“It is James’ portrayal of a tormented Tom Brannick that brings the character and this world to life as he balances the visceral and psychological in a mesmerising central performance,” he added.

James Nesbitt has said the new drama will show Northern Ireland 'in a different light' and said he 'adored' filming in the city.

“Belfast is an exciting, wonderful, vibrant place, it's a really cosmopolitan place, but it also bears the hallmarks of a place that went through the Troubles,” the Cold Feet star said.

“The last number of years has seen Belfast really emerge since The Troubles and because of the success of the film industry there, it's had a boost for tourism too.”

He added that the new crime drama will give people 'a chance to see Northern Ireland in its beauty.'

“It will show Northern Ireland in a different light for people, on both sides of the water,” Nesbitt said.

“I was also attracted to Bloodlands because of my involvement with a charity called Wave and its work with victims and survivors over the years.”

The series has been written by Chris Brandon and Line Of Duty creator Jed Mercurio is the executive producer.

Nesbitt added: “I first met Jed Mercurio years ago when I was doing Jekyll and I've always liked his work. When he was doing Line Of Duty here I would say to him ‘Why am I not in that?’ but he'd say, ‘We'll find something’.

“Then a couple of years ago he showed me a script by Chris Brandon. It was a real thriller and his first commission for his independent film company.”

He added it 'felt like familiar ground with people I really respected and it was such a perfect fit going back to Northern Ireland, doing something contemporary and brilliantly written.'

Bloodlands begins this Sunday at 9pm on BBC One and will continue with three more episodes airing weekly.

Time to enforce respect for officials