No sea border for kayakers 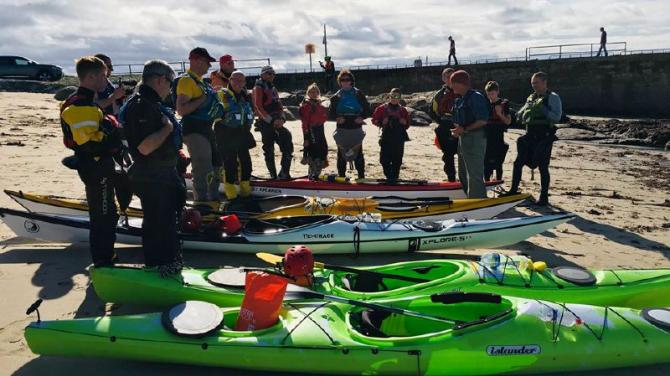 KAYAKERS from Portrush and Donegal have embarked on a unique cross-border clean-up of some of the most inaccessible stretches of coastline in Ireland.

The project funded by the EU's Peace IV programme was a collaboration between members of Causeway Coast Kayak Association and Donegal Sea and surf and Kayak Club.

With a unique ability to paddle into the coast line's nooks and crannies the kayakers have removed tonnes of rubbish from sea caves on the north coast and remote island beaches off the west coast of Donegal.

It all began when Robin Ruddock, president of he local kayak association entered a sea cave at Carrick-a-rede.

“Although I have been exploring this coast for thirty years, I have never taken the time to land there. And when we went in I discovered a huge amount of debris.

“So with our club we organised a clean up and we managed to remove three or four boat loads.”

“It's been a dream of mine for years to get together with folks across in Donegal and do a combined clean up of the coast.

“Then came this opportunity through CRUN who were keen to promote cross-border initiatives.

“I chatted to guys I knew in Donegal about linking up to do something and they thought it was a brilliant idea.”

And so it was that on a beautiful autumn day the two groups paddled out to the remote island of Inishirrer off the county's west coast.

“It's significant because there is a two mile long boulder beach facing south-west that acts as a rubbish catcher for debris moving up the coast,” said Robin.

“It was incredible. The amount of rubbish on the island baffled me. I didn't think there could have been that amount

“On the last run, the boat was so weighed down with rubbish the engine over heated. Thankfully it happened just as we reached the shore to off-load

Robin's opposite number was James O'Donnell of Donegal Sea and surf and Kayak Club.

“And we said we definitely are

“With this being our paddling area we like to see it in pristine condition.

“There was lots of rubbish. I have been coming for many years and it has just been building up all the time.

“But I think we definitely made an impression.

Both Robin and James are confident they'll be back next year for further clean-ups on both side of the border.

“We all love kayaking and it's as much about the places we go as the people we encounter,” said Robin

“And its natural to want to put something back into the environment we love.”

Learn more about the project by watching a short video filmed by the Limavady-based Magic Beans production company. Search https://www.facebook.com/magikbeanz/

Mallon details plans on the resumption of driving tests