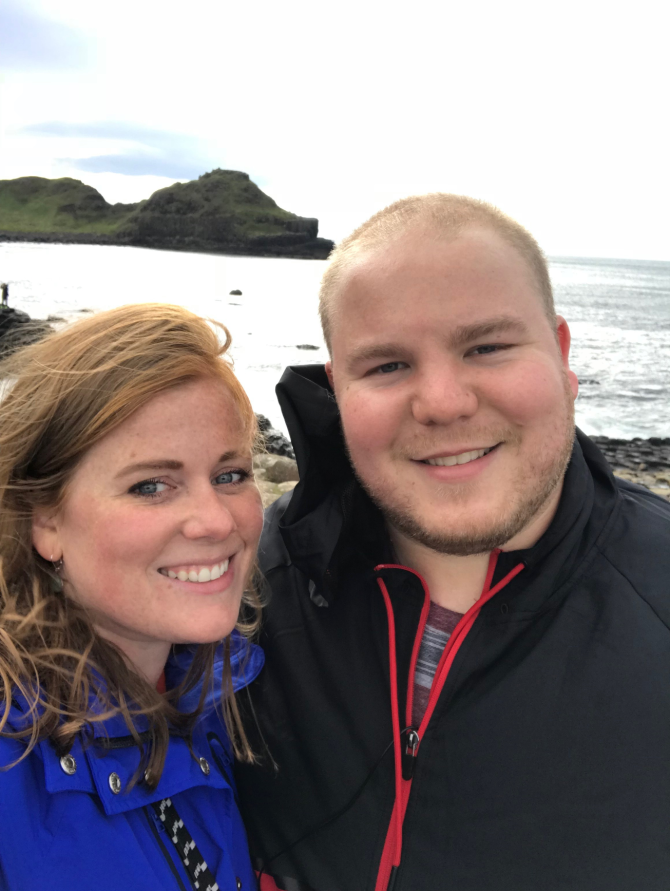 Caroline and Michael Monroe at the Giants' Causeway just prior to the accident.

THE widow of an American tourist killed at a notorious Gracehill Road junction has said that she was “blown away,” by the response of the local community who attended the recent Memorial event at the crash site.
Up to 60 people attended the Memorial for Michael Monroe on Wednesday September 25 at the hamlet of Clintyfinnan beside the Gracehill Rd/Bregagh Road junction where Michael lost his life, exactly one year before.
Michael and been on honeymoon with new wife Caroline, who was injured in the crash.
Subsequently in Altnagelvin Hospital, Londonderry, she was visited by Chris Sherrard and others from Life After, a charity working with those who have lost loved ones on our roads.
Since then Caroline has been in constant contact with Life After, who organised the Memorial event that was live streamed to Caroline and other relatives in USA.
Commenting, Caroline said: “I was very moved by the service last week. I am in regular contact with Christopher, and others at Life After, so I was involved a little bit with the organization of the event, but I was blown away by the response of the surrounding community.
“Seeing faces of people that I have never met, and who never got the chance to know the wonderful person that Michael was, was very touching.
“The grieving process is a constant struggle. The pain is always present. Some days are excruciatingly difficult, and others the pain feels a little duller, but it is always there. We all miss Michael every second of every day, and we always will.”
Efforts to secure improved safety at this and the nearby Walkers Cross junction are ongoing, with the Department for Infrastructure still refusing to replace 'Give' Way signs with 'Stop' signs
Most of the seven serious accidents at these two junctions in the last year have involved American or Canadian visitors, who it is believed may not understand what a 'Give Way' sign means.
Lobby groups include Farmers for Action and Save the Dark Hedges as well as local elected representatives including UUP Cllr Joan Baird who spoke at the Memorial event.