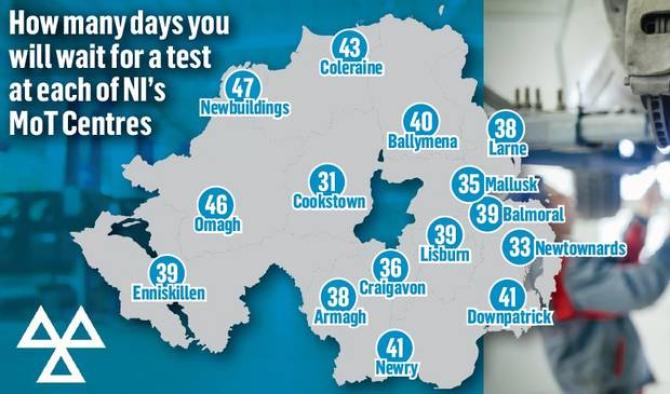 SINN Féin's Philip McGuigan says he has been contacted by hundreds of constituents who can't get an MOT appointment prior to their previous certificate running out and thus leaving them uninsured or unable to tax their cars.
The Department for Infrastructure says it's facing unprecedented demand for test slots and is encouraging motorists to apply nine weeks in advance.
Officials say the backlog is down to an extra 15,000 applications made between January and March 2019 compared to the same period last year.
Extra staff are being recruited and temporary opening on Sundays and bank holidays has been scheduled.
However Philip McGuigan said the backlog is affecting people's live and businesses and he feels the waiting time is completely unacceptable.
He has urged the department for infrastructure to go further to alleviate the long waiting delays for MOT customers in the area.
The North Antrim MLA said: "I have been contacted by constituents from all across North Antrim concerned that they cant get MOT appointments prior to their previous certificate running out and thus leaving them uninsured or unable to tax their cars.
“This despite many trying to book appointments up to five weeks in advance.
“This is completely unacceptable. People in North Antrim need to be able to use their local centres in Coleraine and Ballymena without the need for going beyond that.
North Antrim MLA Mervyn Storey agreed that the waiting times weren't acceptable.
He added:  “The impact of not being able to find timely appointments has had a severe impact upon motorists and on a number of car wholesalers.
“The Department could consider issuing exemption letters to drivers who are waiting for an appointment so that they can use their vehicles in the interim period.
“They also need to clear the backlog. I note that a precedent was set in 2004 for such an eventuality when the legislation was changed to allow motorists to continue driving because of industrial action being taken by MOT staff."
When contacted by The Chronicle, DfI said a number of measures have been taken to increase capacity.
A spokesperson added: “Planning is underway to make MoT appointments available on a Sunday for a limited period of time to address the current backlog in applications."

'Avoid all but necessary travel across the border'