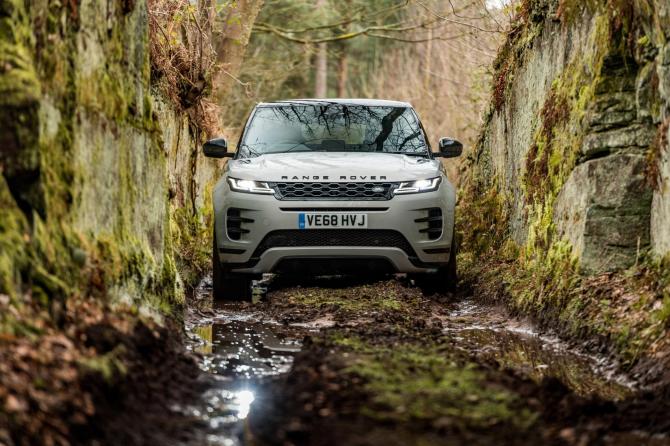 Evoque is equally as capable off road as it is on it.

LUCRATIVE. The only plausible word that will help people fully comprehend just how important the Evoque is to Land Rover. Global sales of the original remained resolutely strong until production ceased last year, with a fifth of the 772,096 snapped up in the UK.

To keep the books balanced, Land Rover’s engineers at Gaydon needed to be bang on the money these last four years. That is how long it has taken to execute the second generation Evoque. So have they? Is the success story set to continue?
We headed to Greece to find out.

Design boss Gerry McGovern made it clear from the beginning that the Mk2’s shape needed to be instantly recognisable but unmistakably new. The Mk1 was often referred to as a ‘Baby Range Rover’. This time, however, there are strong links tying it to the style-laden Velar.

The marginally bigger luxury SUV has clearly influenced the face of the new Evoque which gets a rakish one-piece grille that sits in-between LED headlamps with ‘sweeping’ indicators, and a squarer, more pinched rear set off by lights that reach further around each flank.

‘Reductionism’ is a word you will hear mentioned a lot if you speak to the Evoque’s design team. Don’t worry: we weren’t quite sure what they meant either - until it was pointed out to us. Surface detailing has been toned down  for a simpler, cleaner look. This is especially true of the door skins which are crease-free. The grab handles sit flush with the bodywork, too.

A number of so-called signature elements from the award-winning original have made it across to the newcomer. Clamshell bonnet. Tick. Blistered front wheel arches. Tick. A rising waistline. Tick. A roof that descends backwards gracefully. Tick! Sometimes you don’t mess with what works.

Has McGovern arrived at a  more sophisticated and classier look for Land Rover’s baby SUV? Personally, I believe so. Could the Englishman and his team have been braver, perhaps? It is worth remembering Land Rover wants to increase its customer base by luring more well-heeled people away from BMW, Audi and Mercedes without alienating existing owners.

Looks are key and so it would seem is choice. Apart from ‘First Edition’ models that are only available for the initial 12 months the SUV will be on sale, there are four basic trim levels in either ‘regular’ guise or sportier ‘R-Dynamic’: ‘Evoque’, ‘S’, ‘SE’ and range-topping ‘HSE’.

You still have the capability to ‘spec up’ your Evoque. Everything is pretty much open to interpretation, from the body and roof combinations to the size of the wheels that measure anything from a meagre 17-inches to much more extravagant 21-inches (£1,920). Our car for this trip was a P240 ‘S’ turbo diesel in ‘Firenze Red’ (£640) with a fixed panoramic roof (£1,100).

Inside are all the luxuries people expect, from the enhanced 12-inch instrument panel (£500) and two 10-inch Touch Pro Duo infotainment screens (£400). The in-car system can feel a tad laggy but can now be bypassed as there is also Android Auto and Apple CarPlay connectivity. You can also have the trick ‘Clearsight Groundview’ and ‘Clearsight Rear View Mirror’ (£315) - a pair of useful additions and technologies we feel plenty of people are set to go for.

Material choice is second to none - the chairs covered in perforated leather or premium wool mix/suede cloth called Kvadrat (starting at £570) - as is the detailing - soft, diamanté embossed rubber that covers the dash’s top half.
This is supplemented by lashings of piano black plastic and real metal trim on the door cards and around the lower half of the console. All in all, the cabin’s architecture is satisfyingly special.

Mindful that the Mk1 Evoque wasn’t perfect in every aspect, Land Rover has worked hard to rectify past misgivings. Boot volume has been hiked by 10% to 591-litres when the 40/20/40 back seats are in place, expanding to 1,383-litres when they are folded down flat.

Side by-side, the old and the new Evoque are the same length, but stretching the latest car’s wheelbase by 20mm has freed up useful leg and knee space for two adults in the rear. Good though it is, Volvo’s XC40 is head and shoulders above it, but most should find it adequate.

Passengers should also find the cabin a more sound-proofed environment. Certainly, efforts to reduce wind and road noise have been fruitful, and a more aerodynamic profile (-14% drag coefficient) ensures the plush, decluttered cabin is a relaxing and comfortable place to reside.

Engineers have stiffened the compact-sized body by 13% to the benefit of handling and refinement. Therefore, the Evoque is now a better proposition to drive through city centre traffic or rural roads. Only the harshest imperfections fool the optional active dampers, yet for the most part the Evoque’s ride is pleasant - whether you are on-road or venturing off it.

Few, if any, are likely to get their Evoque dirty but there is no reason why they should not. Over unusual terrain (mountain roads, rutted paths, grass fields and gravel tracks) we found that its traction was pretty peerless thanks to the ‘Terrain Response 2’ software having Range Rover DNA in it. This is able to detect the surface each of the wheels is touching and adjusts the settings accordingly.

Power is supplied by a trio of four-cylinder turbo petrol engines (197bhp, 247bhp and 296bhp) and three turbo diesel units with 148bhp, 178bhp or 237bhp. We drove both mid-power fuel derivatives. Below 3,000rpm they fade into the background but push above this marker and they soon feel strained and sound alarmingly coarse all too quickly.

Another weak area is the firm’s ZF nine-speed automatic. It is a real mixed bag. At a constant speed along motorways it chops and changes with minimal hesitation. The picture is altogether different on a steep climb as the transmission struggles to keep up with the driver’s demands for low-end shove at the moment you need it most, thus leading to jerkiness.

All automatic Evoques apart from the front-wheel-drive diesel now benefit from part-electrification. Energy normally lost during deceleration is stored in an 8Ah lithium-ion battery. Mated to a 48-volt mild-hybrid system, the set-up can cut the engine off at speeds below 11mph to improve fuel consumption by a claimed 6%.

We found the technology unobtrusive and suspect the assistance that it brings during acceleration by cutting down on turbo lag and serving up a healthy dose of torque (30Nm) will be appreciated by those who choose to run either the smaller petrol or diesel engine.

Within the next few months these will be joined by a plug-in hybrid alternative. A three-cylinder, 1.5-litre turbo petrol with 197bhp and 280Nm of torque is going to be supported by a 11.3 kWh lithium-ion battery that can take total power to over 300bhp if they are used in tandem.