Brookes and Sykes rack up points at Oulton Park 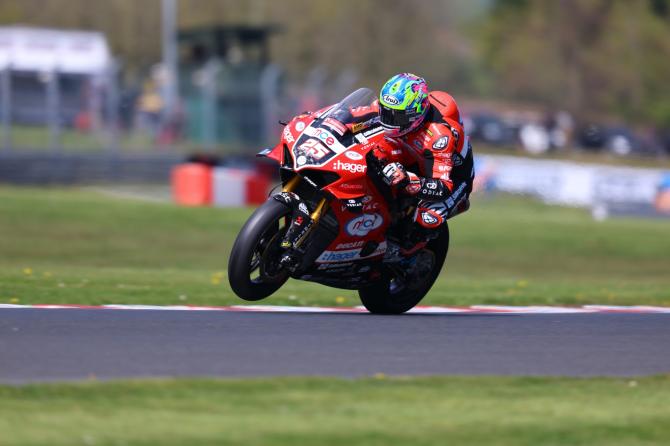 MCE Ducati’s Josh Brookes - on his way to next week's North West 200 - took two hard-fought top ten finishes in the second round of the 2022 Bennetts British Superbike Championship races at Oulton Park today with eighth and tenth seeing him maintain his 12th position in the early season championship table.

Team-mate Tom Sykes took a best finish of 11th in the final race where he also posted his quickest lap time of the weekend for Paul Bird’s Lake District-based team.

With good conditions all day at the Cheshire venue, the opening 18-lap race saw Josh start from the third row of the grid with Tom four rows further back with the duo completing the opening lap in sixth and 16th respectively.

The pairing soon found themselves locked in their own respective battles but when the safety car was deployed on lap seven after a crash, Australian double BSB champion Brookes found himself shuffled back to tenth with ex-WSBK champion Sykes fighting his way up to 14th.

When racing resumed three laps later, Josh was unable to do anything about the riders ahead of him and crossed the line in tenth whilst Yorkshire-born Sykes moved up another spot to take 13th at the chequered flag.

The results meant they started from the fifth row of the grid for the final race of the weekend, where both riders made early progress and by lap six, they were both running inside the top ten.

Brookes elevated himself to a battling eighth place at the chequered flag with Sykes putting in his strongest ride of the weekend in terms of both lap times and position to claim 11th.

Josh Brookes: “The first race today was disappointing as we made the wrong changes to the bike, and it just didn’t work out. I went backwards and faded pretty much from the start, so it was disappointing for all concerned. We put the bike closer to how it had been yesterday and had the information to make only a small change and the bike worked better albeit not with the lap times to compete for the podium. It was obviously difficult starting a long way back on the grid too, but I was happy to recover some form at the end. We definitely need to make improvements with the bike as we’re running a similar pace to 2019 and 2020 but things have obviously moved on since then.”

Tom Sykes: “It’s been a little bit challenging this weekend but at least we now understand some of the parameters much clearer, so we have a good idea of what changes we need to make to the MCE Ducati. The laps in qualifying were the very first ones I’ve done on the bike in the wet and we had a great feeling, but with the information we’ve gained at both the test and in the three races, we have a positive direction in which to go. I’m expecting we can find a big improvement for the next round at Donington Park.”

John Mowatt, Team Co-ordinator: “After fourth in Sunday’s race, we were looking to make a further challenge for the podium positions with Josh today but, unfortunately, it didn’t pan out that way. The lap times stayed the same and we again paid for starting on the fourth and fifth rows. I’ve said it before but if you’re not on the front three rows, you’re up against it. He fought hard until the end of each race though and picked up points and we all know how valuable they are, however big or small. For Tom, today was a lot better day and he continually improved so much so that his best time of the three days came in the final race of the weekend. It’s testament to him that he kept going like he did, and it will certainly help him when we return to Oulton Park later in the year. The next round is at Donington Park, a circuit he knows well and what’s required from a bike to go quick round there so I’m sure we’ll see him a lot closer to the front there.”