Brandon McCaughan is crowned Rookie of 2021 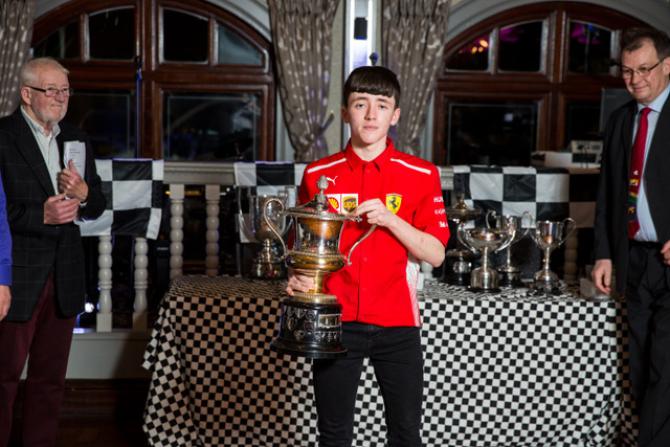 THE FIVE Hundred Motor Racing Club of Ireland presented their awards for both the 2020 and 2021 seasons, with Ballycastle’s Brandon McCaughan among the prize winners.
With attendance numbers being slightly lower than in previous years, only trophies belonging to those present were handed over.
Donal O’Neill compered the evening and began by announcing that Ingo Dohnke, father of Fiesta racer Timon, had made the journey from Germany to lend his support to the event and agreed to present the awards.
The 2020 awards were given out first, with Strangford driver Megan Campbell first up as she collected her trophy for third place in the Fiesta Championship.
Next up was the BMW330i Cup winners. Londonderry driver Gavin Kilkey took first place, followed by Lisburn’s Greer Wray and his brother, Keith, who were second and third respectively.
Paul Sheridan, from Randalstown, won the Mod-5-Cup for Mazda MX5s.
In the Roadsports Championship, Moira driver Kieron Smyth took second overall and first in Class A.
In Formula Ford 1600, ‘The Randalstown Rocket, Alan Davidson, took second overall and won the Pre-90 class.
Chris Hillis, from Drumbo was second in the Pre-90 and Ballymena veteran, Henry Campbell, was third.
The 2021 awards were next and once again Alan Davidson was wearing down a trench from his table to the stage, collecting trophy after trophy.
He took second in the Formula Ford 1600 and won the Pre-90 Class again. However, this time it was the new kid on the block, Brandon McCaughey from Ballycastle, who took second place in the Pre-90s.
Henry Campbell picked up the third prize place trophy on behalf of Ryan Campbell.
Paul Sheridan clinched third in the Modi-5-Cup for Mazda MX5s and Megan Campbell took another fine third place in the Ford Fiesta Championship.
In the BMW 330i Cup, Greer Wray sealed second place and this time his brother, Keith, won.
In the Saloon Championship, Isle of Man driver, now resident in Dublin, Dan Keelan, took a popular third place. Second was Keith Wray and first was Donal O’Neill.
The Marshal Of The Year trophy went to Nigel McCrutcheon and the award for Rookie of the Year went to Brandon McCaughon. John Harris, who prepares many of the FF1600 cars, won the Personality of The Year Award.