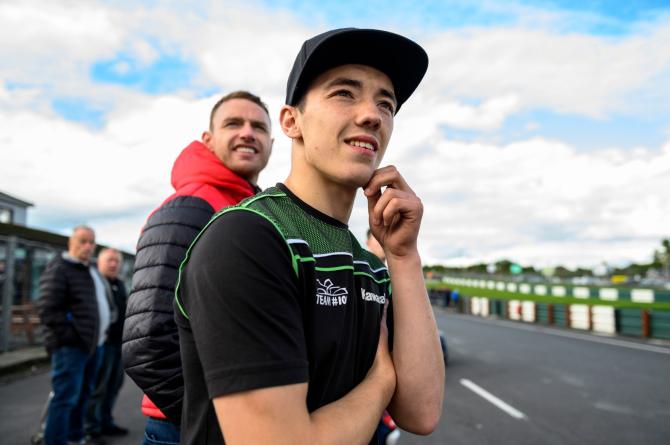 AGHADOWEY racer Eunan McGlinchey has been putting his spare time to good use in recent weeks - finally getting round to building a cabinet for the many trophies he has won over the years.

Currently in lockdown like the rest of the country, the rising young star of motorcycling enlisted the help of his uncle to complete something he had been meaning to do for a long time.

And, while rewarding in itself, it doesn’t come anywhere close to compensating for the lack of action on the track in what had promised to be a breakthrough season for McGlinchey.

Set up in honour of Ballinhassig’s Sean Hurley, who was killed in an accident close to his home in county Cork, Team#109 became the first from the Republic of Ireland to win a British Championship title two years ago.

And buoyed by backing from bike giants Kawasaki, the family based team had high hope for this year and its sole rider, Eunan.

Now, those plans are on hold - for the foreseeable future.

“At the moment there is no official information on what is happening within the WSB,” admits Eunan.

“In my own opinion I can’t see any racing taking place within the next couple of months and unfortunately I don’t think Donington will run either due to all that’s happening with lockdown.

“I hope I’m wrong in what I’m saying as I really enjoy racing at Donington and it would be my home round within the WSB circuits.

“There have been a few rumours in regards to possibly running races behind closed doors with a limited number of people attending within each team but, again, this hasn’t been confirmed.

“If these speculations turn out to be true then I would say the first race could be in Assen on the August 21-23 which would be fantastic if it did!

The ongoing uncertainty is less than ideal preparations for such a big season but Eunan is determined to make the most of the opportunity when the time is right.

“This is a massive opportunity for me on a personal level and also extremely important too within a team level,” he continues.

“I’m sure a lot of people know of Sean’s bucket list, that he wanted to make it to the world paddock, so I’m hoping I can make this happen in his name.

“For me, personally, I feel this is the right step at this time in my motorbike career to show I have the skills and determination it takes to go out and push myself to the edge in every race.

“I continue to have a great team #109 behind me, who over the last two years have had my back and I feel we’ve built up a great relationship with them all.

“It gives me great pride racing for Team #109 and having my family and supporters from back home supporting me gives me a great sense of faith, confidence and pushing me to do well.”

And he’ll need all that support as he continues his racing education, competing on a series of tracks of which he has little or no experience.

“The only circuit within the WSB calendar that I’ve have raced on before is Donington so every other race within this World Supersport 300 championship will be a brand new track to learn and race every time,” says Eunan.

“This part doesn’t bother me as I’m a quick learner and can adapt quite quickly. I can’t say at the moment which of the circuits I’m most excited about racing at as they are all new for me, but I do like Missano - it looks great to race at. I’m looking forward to racing at them all so let’s hope this coronavirus goes away soon.

“I’m not going to lie and say this will be a easy season - far from it! This is a very highly competitive class with former race winners and a wealth of race skill and talent within the racing field. In saying that I do feel confident enough to go out there do my very best and I don’t think I will be far away from the front runners.

“The Kawasaki is as good a bike to be on and with still having Kawasaki UK support is great. I won the British junior championship in 2018 on similar machinery so it’s a bike I’m familiar with and, as I said earlier, I’ve a great team with Paul Tobin as team manager and Scott Thompson as my new crew chief this year whom I’ve full confidence to put a great bike below me.

“Before lockdown, I trained with my personal trainer three times a week but, unfortunately, with it having to close I have been training at home myself. It’s not the same working through apps on my phone and trying to keep motivated but I do keep up my fitness with all my workout apps and cycling running as this is very important to me.

“I’ve been saying for a long time about building something for all the trophies I’ve gathered throughout my racing so far. Throughout lockdown I’ve eventually got his completed with thanks to my uncle who built it.

“I’m really happy with how it turned out and I hope to be adding to this soon!”