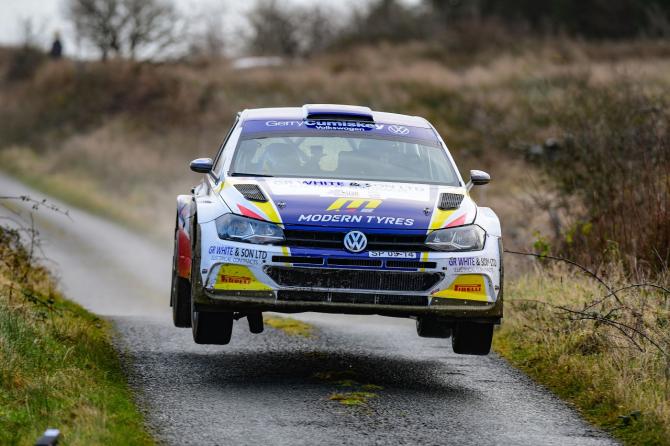 Alastair Fisher switches back to a Fiesta for the West Cork Rally,

ALASTAIR FISHER has said there was a period when he doubted whether he would ever win a round of the Irish Tarmac Rally Championship after making second place his own for so long.

The 31-year-old ended the wait for a first international victory on home soil at the Galway Rally, setting fastest times on four of the event’s nine stages to secure an emotional win by 21.1 seconds.

Fisher ranks the success – which came on his debut in Volkswagen Motorsport’s Polo R5 alongside Gordon Noble – as more significant than his triumphs from the 2014 Junior World Rally Championship.

The performance was all the more remarkable as the nephew of the late Bertie Fisher only briefly tested the Dom Buckley-run car days beforehand. Cold weather also hampered his preparations.

“We have had the perfect start to the championship and to come away with a first win is great,” he said.

“I have had a fair few second overall finishes in the Tarmac Championship so naturally you begin to question if you are ever going to make it onto the top step of the podium.

“In the past things didn’t go right for whatever reason when we were leading a rally and we either didn’t finish or we ended up taking second or third.

“There have been so many days in this sport when things just haven’t gone our way but thankfully that all changed in Galway. It all came good.

“Deep down I knew that as much as we had success in France and Portugal during our JWRC days that getting that first win in the Irish Tarmac Rally Championship would be special,” Fisher added.

“It is really nice to see the Fisher name back on the Irish Tarmac Championship’s winners’ list.”

Looking to the next round of the Irish Tarmac Championship in West Cork, Fisher believes potency levels in the new Polo can be ratcheted up even further.

“I’ve ideas what areas of the car we can work on,” he said, “and as the year progresses and conditions improve the car will only get faster.

“The big improvement with this car is the chassis. It’s so stable and  that is one of the reasons why I settled into it so quickly in Galway.

“I feel that we can give this year a really good go in the Polo,” added Fisher, who switches to a Ford Fiesta R5 Mk2 for this weekend's event in Clonakilty.

Fisher’s triumph in Galway was the second consecutive win in the competition for the Volkswagen Motorsport developed car.
The first came on last year’s Cork ‘20’ Rally with Marty McCormack.