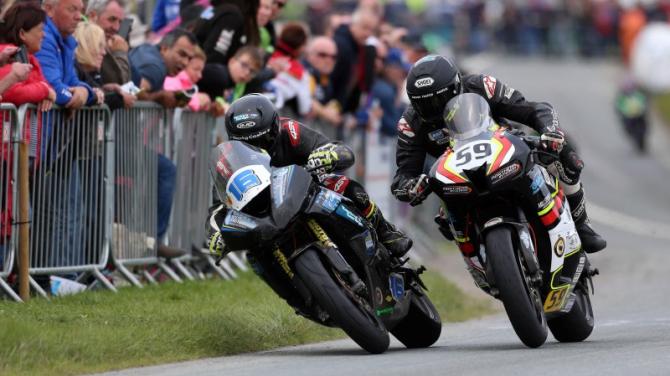 Darryl Tweed (right) battling it out with Mike Browne during the East Coast Racing Festival at Killalane at the end of last season. Picture: Pacemaker Press.

ROAD racer Darryl Tweed is hoping that a brand new Yamaha R6 will provide the perfect ingredient for further success during the new road racing season.

The Ballymoney man is set to team up with Stanley Stewart Racing for 2020 having recently taken delivery of a new bike and a well-specced racing engine to boot.

Tweed raced under the Stewart Racing banner at last year’s Classic TT and with a Spanish test on the horizon next month, he is hopeful that both rider and team will be able to hit the ground running when the road racing season gets underway at the Cookstown 100 at the end of April.

Speaking to Chronicle Sport, Darryl Tweed said: “I’ll be heading to Almeria next month and I’m hoping that I’ll be fit to ride the bike for the first time over there.

“As I’ve said in the past getting on the bike as early as possible is so important, especially if it is a new bike. It means you can iron out any problems and get used to the bike a lot quicker,” explained the former Manx Grand Prix winner.

Ahead of the new season, Darryl Tweed will be holding a fundraiser in Ballymoney Rugby Club on Friday, March 28 where fans will be given the chance to catch the first glimpse of his new machine.

Magician Rodd Hogg will be in attendance with a raffle and disco also due to take place on the night.