John McGuinness hoping for a change of fortune 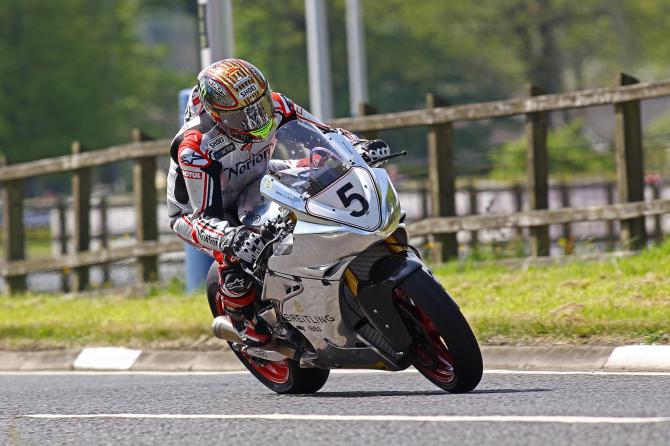 MORECAMBE rider John McGuinness admitted that he was “happy enough” after Tuesday’s opening practice session at the North West 200.

McGuinness is back racing at the event after a horror crash at Primrose Hill two years ago. The 47-year-old is a seasoned campaigner on the roads and his much talked about return with Norton has proved a massive hit with road racing fans that made the trip to the Triangle on Tuesday.

“I’m happy enough but a little disappointed because I only managed six laps.

“I would have liked a few more and I could have really done with a Supersport or Superstock bike to get a few more laps in but the bikes have been ok so far,” he said.

McGuinness finished 19th in the opening Superbike session and 20th in the Supertwin class in Norton’s first appearance at the North West 200 since the nineties.

Machine trouble hampered the 23 time Isle of Man TT winner on Tuesday; however, he is hopeful of making amends later today.

“I had an issue with the Superbike,  the clutch started slipping so I found myself parked up for most of the session,” he said.

“The Supertwin bike had a little issue because I found it difficult to ride at high speed but we will have a look and see if we can make some improvements and Thursday will be a new sheet of paper.”

After an indifferent start, McGuinness explained that he is delighted to be back on the north Coast.

“I have not raced here in two years and to be back here when the sun is shining makes it a little bit more special.

“I’m just a little bit frustrated because I wanted to be out on track a little more on Tuesday but it is what it is, you just have to regroup,” he said.

It is yet another action packed day ahead for both riders and teams as the 90-th anniversary gears up for a double header today with practice this morning before the opening three races get underway this evening as the riders in Supersport, Superstock and Supertwin machines all prepare to do battle.

*Keep up to date with the Chronicle throughout the day.