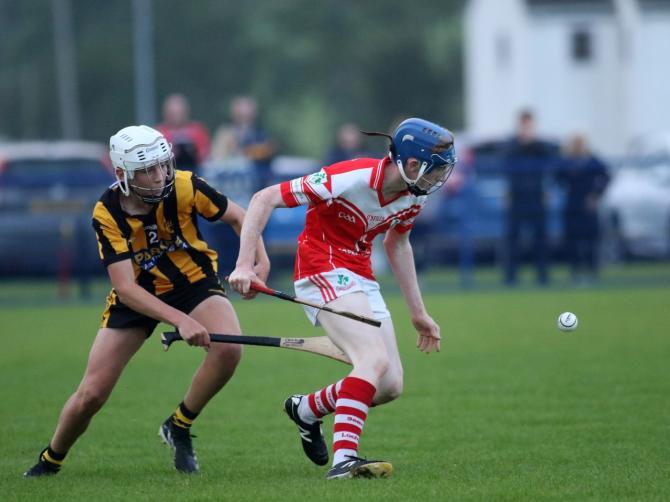 There's nothing like sheer determination and that's what back to back Antrim minor hurling champions Loughgiel displayed when they disposed of Ballycastle in this semi final at Armoy.

Seven minutes into the second half the Town had opened a six point lead against a Loughgiel reduced to fourteen  and it looked like the Shamrocks attempt at a three in a row run was in jeopardy.

However, a Ronan McCollum goal two minutes later saw the champions staging a comeback of epic proportions, scoring a further 13 times while holding Ballycastle to just four scores and, at the end, they had nine points to spare.

The champions had started strongly and with Jack McCloskey in top form at full forward they were 1-2 to 0-1 after six minutes, McCloskey getting 1-1 and Ronan McCollum 0-1 to overhaul Cathair Donnelly’s early point.

An exchange of points by McCloskey and Ballycastle’s James Bakewell kept the gap at four, but a goal from Ballycastle full forward Oran Donnelly and a point from Darragh Kelly brought the sides level after thirteen minutes.

It was point for point for a while until a Darragh Kelly goal five minute from the break gave Ballycastle the edge and they went into half time with 2-7 to 1-7 advantage.

Jack McCloskey cut the gap back to two within a minute of the restart, but Ballycastle came back with four on the trot, two from  James Bakewell  and singles from Craoiste McAuley and Tienan Hegarty to open a six point lead.

At this stage the Town appeared to be pulling all the strings and an an upset looke on the cards, but when Ronan McCollum fired in a goal in the ninth minute the Shamrocks found another gear.

Bakewell pointed twice within five minutes for Ballycastle but the remainder of the game belonged to Loughgiel as they hit eleven of the next twelve scores to crush the opposition into submission.

Six of the eleven came from Jack McCloskey while Tiago McGarry got two, with Darragh Patterson, Ronan McCollum and Liam Glackin getting the onters.

Darragh Kelly got a late point for Ballycastle but Loughgiel ended with a goal from a penalty from Tiago McGarry to win by nine, in a game that , at one stage, they appeared to have lost control.