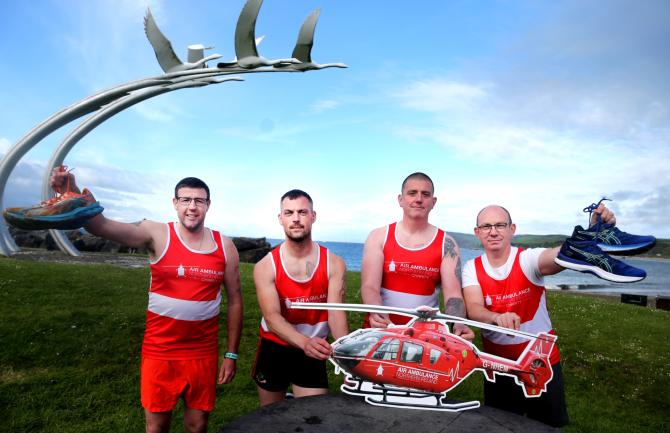 From left to right, Damian Devlin, Kevin Murphy, Paul Humphries and Paul Quinn who will take part in a four day Quest in Co.Donegal which will see the group running four half marathons over four days

A BALLYVOY man who lost his wife and uncle in a tragic road traffic collision is lacing up his running shoes to take part in the Extreme North (Quest) to raise money for the Air Ambulance NI.

Paul Quinn lost his beloved wife Tracey and his uncle Fred in November 2020 and on that fateful day, the Air Ambulance had been en route to them.
Paul told the Chronicle: “Back in January I was out running with my friend Damian Devlin and he broached the topic of doing a run for charity.
“I thought this would be a great idea to give something back and after doing some research, Damian came up with the Extreme North (Quest) run.
“It's four half marathons in four days and takes in the Wild Atlantic Way including Malin Head and Inishowen, it won't be plain sailing but the different route each day should provide some stunning scenery for us to admire.”

But Paul and Damian won't be running the rugged Donegal landscapes alone, for they've managed to convince fellow Ballycastle Runners AC members, Kevin Murphy and Paul Humphries to join them.
Paul added: “Once I approached the other two fellas it was full steam ahead, we got it booked and are keeping up with the training.
“The roads will be narrow and some of the hill climbs will be over 1000 foot in places, it's not something you'd approach without taking it seriously.”
After the lads signed up for the challenge, which will be held on August 11th, 12th, 13th and 14th they had to decide the charity they would be running for.
Paul continued: “The charity everyone picked was the Air Ambulance NI which was quite an emotional moment for me.
“It was only 18 months ago that I was involved in a road traffic collision and lost my beautiful wife Tracey and my uncle Fred.
“The Air Ambulance had been on its way to us that day, but unfortunately was diverted back to base.
“We are so fortunate to have this Air Ambulance available for everyone in Northern Ireland in the event of an emergency and I for one understand the importance of it and saving lives at the roadside.
“This vital service which is able to get to remote locations is dependent on fundraising to keep it operational.”