Milltown will play host to Warrenpoint Town's clash with Linfield at the weekend, and the skip next door will have to close to allow Sky Sports to broadcast the game safely.

WARRENPOINT Town FC will have no fear of being taken out with the trash when their Linfield FC clash is broadcast on Sky Sports – even though the match is next door to a recycling centre.

The high profile Irish Danske Bank Premiership match on Saturday will see the bottom of table team fight for survival against the league leaders, with the Blues looking to push away from rivals Cliftonville.

Sky Sports are now able to broadcast the 12.30pm football match safely after a late application for early closure of Warrenpoint recycling centre – which is next door to Warrenpoint Town’s ground – was approved at the council’s neighbourhood services committee on Wednesday night.

The closure of the waste facility will allow for a section of road at the club’s Upper Dromore Road base to be closed. The shared entrance’s closure means Sky Sports TV can operate a live broadcast while avoiding any health and safety risk for participants as well as people using the facility.

The recycling centre will be closed from 11am on Saturday March 26, with sign posts along the route advising members of the public.

Warrenpoint are rooted to the bottom of the table, some 12 points off Portadown in 11th who occupy the relegation play-off position.

Warrenpoint manager, Barry Gray, speaking to the media (Tuesday March 22) following a 5-2 beating against Coleraine, said he was dreading the match against the Blues.

“I’m absolutely dreading it, to be honest with you,” said Gray.

“We’re playing the best team in the country, top of the table against the bottom, and there is a gulf of difference between the two teams. Man for man, squad for squad,” he added.

Due to the late receipt of the request, the implementation of the recommendation will go before full council some nine days after the match on 4 April. 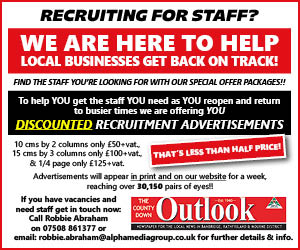