Fire chiefs advise residents to remain in their homes, as MLA warns of asbestos risk 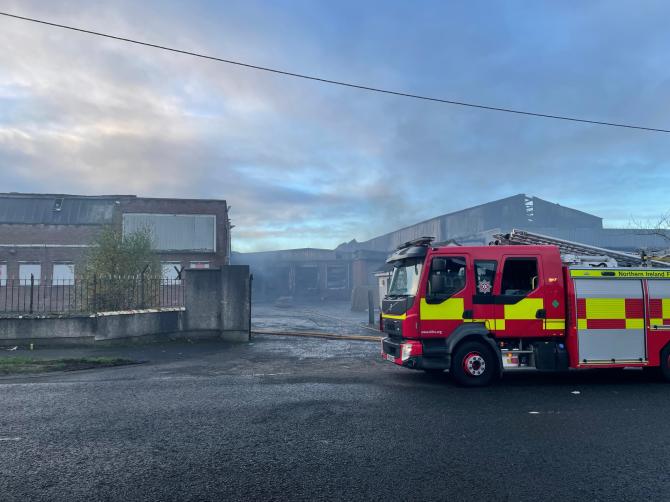 Firefighters remain at the scene of the huge fire on Ballymena Road, Ballymoney.

THE Northern Ireland Fire and Rescue Service have just released an update about the fire at industrial premises, previously known as Fleming Poultry, Ballymena Road, Ballymoney.

“Firefighters from across Northern Ireland remain at the scene of a major fire at an industrial premises on the Ballymena Road, Ballymoney. Throughout the night more than 100 Firefighters, including 9 Officers, 15 Fire Appliances and 10 Specialist Appliances fought to bring the fire under control.

"The incident is no longer being treated as a major incident however more than 30 Firefighters, including 4 Officers, 4 Fire Appliances, 2 Aerial Appliances and 1 High Volume Pump remain at the scene alongside a Command Support Unit.

"As the incident continues, arrangements have been put  in place to maintain emergency response cover across Northern Ireland. The incident is expected to continue into this evening.

"We continue to ask the public to avoid the area and for local residents to remain in their homes.

The cause of fire is still under investigation.”

Local Sinn Féin MLA Philip McGuigan has praised the efforts of those who brought the blaze under control.

“I commend the efforts of the Fire Service who brought a large fire at the former Fleming Poultry factory under control and stopped it spreading.

"The fire service are expected to remain in place for at least another 24 hours.

“They have advised the public to stay indoors and keep windows closed in the immediate area because of the risk of asbestos, which is still burning in the building."