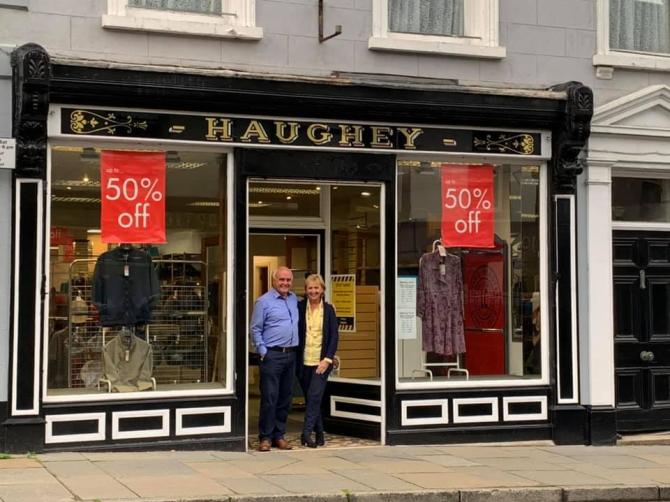 Danny and Rosemary McConaghie pictured in front of Haughey's shop on their last day, September 30

AFTER 125 years and six generations of shopkeeping, September 30 saw Rosemary McConaghie close the doors on Haughey's Ballycastle for the final time.

Speaking to The Chronicle, Rosemary said she wanted to thank everyone who had shopped with them over the generations.
She said: “Ballycastle is a great wee town and the people are so loyal.

“We have people that shopped with us as children who now bring their own children in.  I just want to say a heartfelt thank you to them all for their custom with us and with my aunt, grandparents and great-grandparents.

“I am the sixth generation of shopkeeping at Haughey's and it has been a pleasure.  Haughey's was very much a family shop to begin with and remained that until we closed the doors.

“In 1896, my great grandfather George Haughey, who was a farmer from Bushfoot and his new wife, Mary Ann McPeake acquired a site on Ann Street and built a new shop and house.

“The business was continued by my grandmother Mary White followed by her daughter, my aunt Mary Thomson.”