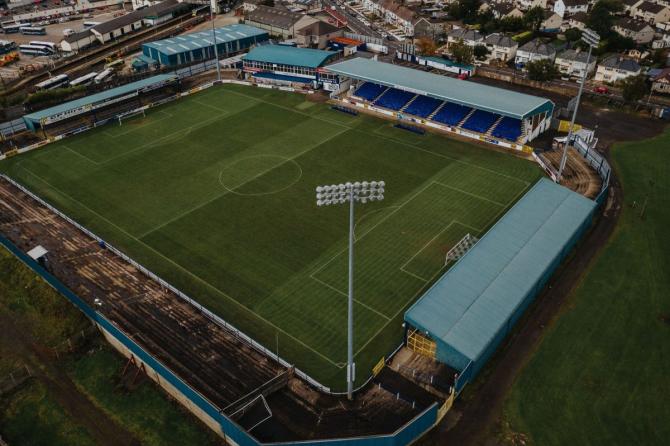 The Showgrounds will look different at the start of the 2021/22 season.

Coleraine Football Club has today confirmed the installation of a 4G pitch for next season.

A statement on the club's website said that the work will start in June after the campaign is completed, with matches at the beginning of next season being switched if required to do so.

Coleraine Chairman Colin McKendry outlined how the investment will help add a 'community feel' to the Ballycastle Road.

“It is massive for the football club but also the local community,” he said.

“This is a community club and we want to open it up to everyone and all different sports.

“We have our own Youths set-up here so we want this to be a community hub and we believe the investment will stand us in good stead moving forward.

Coleraine boss Oran Kearney highlighted the importance of being able to train at The Showgrounds and acknowledged how his side have got accustomed to playing on a 4G surface throughout the years.

“I’m here a long time now and it’s been something we have tried to achieve for a huge amount of years,” he said.

“We all know the benefits it will bring off the pitch, but as a team, we train on the 3G at the University and we have had plenty of good results on that surface.

“I think our current pitch plays well in September, October and November time as its slick and the ball moves well on it, but there have been other games we have found it tough as we can’t move the ball as fast.

The works will be carried out by Clive Richardson Limited, with more about this exciting project being printed in next week's edition of The Chronicle.