A 'very successful' Heart of the Glens Festival 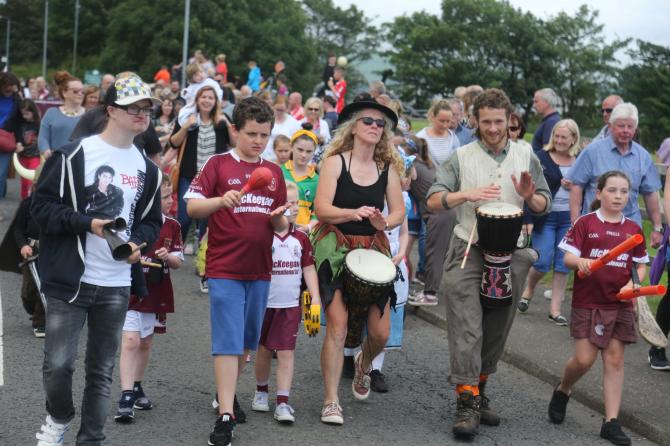 Leading the parade during the Heart of the Glens Festival parade.

THE 29th year of the Heart of the Glens Festival has been labelled as ‘very successful’ as visitors from across the UK and beyond enjoyed nine days of activities.

The Festival proceedings got underway on Saturday, August 3 and were brought to a close nine  days later on Sunday, August 11.

There was a packed programme of events and lots of old favourites such as the sheep dog trials, the adult treasure hunt and the Glens Cycling Club ‘Festival Time trial’, plus much more.

New events were added to the schedule as there was a photo presentation by local Pulitzer Prize winning photographer Cathal McNaughton. Elsewhere, there was a variety show with film surprises called ‘Let Me Entertain You’ and Diancursa, an intense Irish Language Course. The Church of Ireland once again hosted “Dalriada Sounds”, which featured the Glens of Antrim Comhaltas.

The Food Fest, Lurig Run, Street Party and Waves of Tory continued to be popular events this year, with appearances from Community Tribal Drummers, Finn McCool and the Giants.

The Festival concluded on Sunday evening with the Grand Finale Street Party, which included the Ping Pong Ball Race on High Street, a performance of music and dance with Lir School of Dancing & Glens Comhaltas, not forgetting our signature event the Waves of Tory which the visitors loved getting involved in, before folk group ‘The Crazy Folkers’ provided a lively end to proceedings.