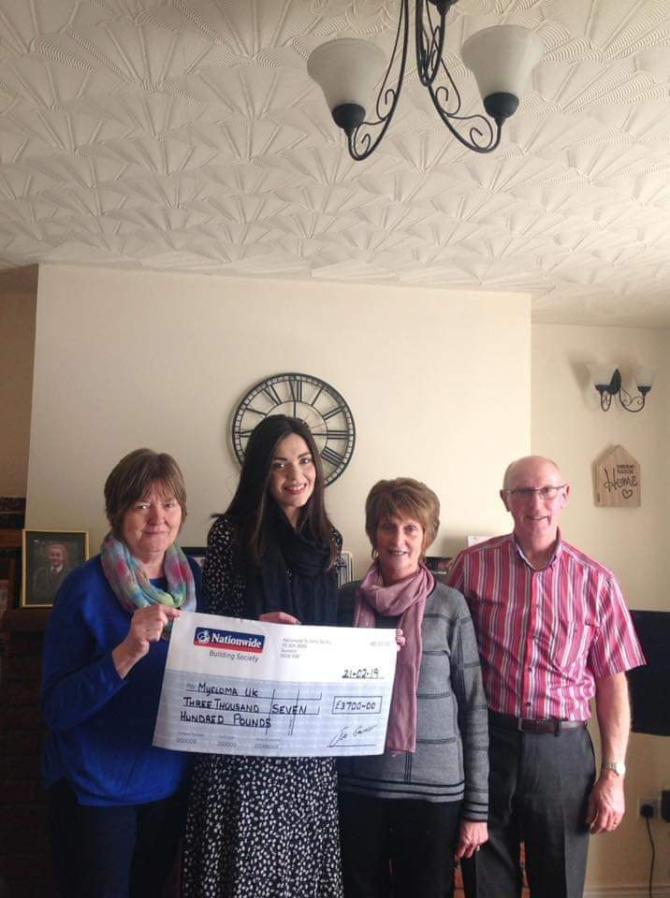 Pictured are Ian & June Murphy from Cloughmills and Gloria Gault from Bushmills presenting a cheque for £3700 to a representative of Myeloma UK. Gloria along with June organised a coffee morning

A COFFEE morning held in Dervock Reformed Church Hall has raised £3,700 for a very worthy cause.

Bushmills woman Gloria Gault wanted to raise funds for Myeloma UK after her sister was diagnosed with the cancer in 2017.

The generosity of the public was evidenced as £3,000 was raised at the morning, with G-Tech business in Balnamore also donating £700.

Myeloma, also known as multiple myeloma, is a blood cancer arising from plasma cells. At any one time there are around 17,500 people living with myeloma in the United Kingdom.

It accounts for 15% of blood cancers, and 2% of all cancers. Myeloma mainly affects those over the age of 65, however it has been diagnosed in people as young as 20.

Unlike many cancers, myeloma does not exist as a lump or tumour. Most of the medical problems related to myeloma are caused by the build-up of abnormal plasma cells in the bone marrow and the presence of paraprotein in the body.

Myeloma develops when DNA is damaged during the development of a plasma cell. This abnormal cell then starts to multiply and spread within the bone marrow.

The abnormal plasma cell release a large amount of a single type of antibody - known as paraprotein - which has no useful function.

Myeloma affects where bone marrow is normally active in an adult, such as in the bones of the spine, skull, pelvis, the rib cage, lone bones of the arms and legs and the areas around the shoulders and hips.