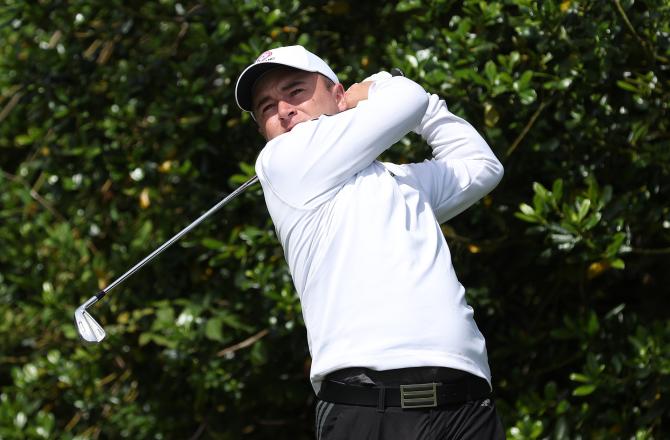 Match play specialist John Gough stayed on course to make history as he progressed to the last-32 of The 127th Amateur Championship at Royal Lytham & St Annes and St Annes Old Links.

The Englishman has won 20 of his last 22 match play ties and saw off the challenge of Denmark’s Frederik Birkelund with a convincing 8&6 win to continue his knockout form.

Gough also won the Lytham Trophy at Royal Lytham & St Annes in May and can emulate Sir Michael Bonallack by winning The Amateur and Lytham Trophy in the same year. Only Bonallack has achieved that feat after he won the 1965 Lytham Trophy and then triumphed in that year’s Amateur at Royal Porthcawl.

While leading qualifier Jonathan Broomhead from South Africa continued his title bid, beating home club member Callan Barrow by one hole, there was disappointment for another English player, Barclay Brown.

The Walker Cup player was beaten 4&3 by Dane Gustav Frimodt, who came through 36 holes today after a preliminary round victory against Lars van der Vight of the Netherlands.

Mark Power, another member of the Great Britain and Ireland Walker Cup side at Seminole last year, stayed on track for success after a hard-fought one-hole win over Australian Jack Buchanan.

Joe Harvey, the beaten finalist in 2020, was also a winner, defeating Jerry Ji from the Netherlands by a hole. However, there was disappointment for last year’s runner-up at Nairn, Monty Scowsill, who bowed out 6&4 to Aldrich Potgieter from South Africa.

Scotland’s Sandy Scott, fit-again after almost two years of wrist injury problems, was victorious over Welshman Matt Roberts 2&1, but his younger brother, Calum, was knocked out by Irishman Jack Hearn 2&1.

Wales’ James Ashfield, a semi-finalist last year, beat Joshua Greer from Australia 6&4, while Sam Bairstow – the leading GB&I player in the field – came through against Norwegian Herman Huus by one hole.

Italian Matteo Cristoni had a marathon day, winning at the 24th this morning against South African Jordan Peter Duminy, before a one-hole win against Englishman Olly Huggins.