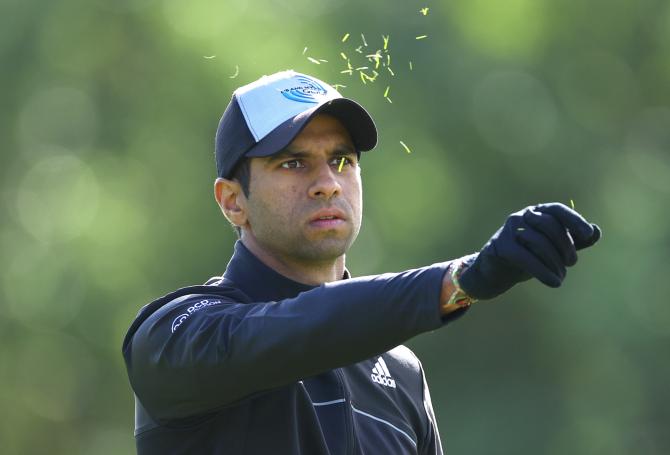 AARON Rai carded a level par 70 to take the clubhouse lead at the Dubai Duty Free Irish Open, where play was suspended overnight due to darkness following a morning frost delay on day two at Galgorm Castle Golf Club.

There were still nine groups left to finish their second rounds before play was halted, but it was Englishman Rai who led the field going into the weekend as he chases the second European Tour title of his career.

The 25-year-old, whose maiden victory came at the 2018 Honma Hong Kong Open presented by Amundi, birdied the last for a level par 70 and a five under total.

That moved him one stroke clear of Robert Rock, Dean Burmester and Joakim Lagergren on four under.

Ryder Cup Captain Padraig Harrington signed for a disappointing five over par 75 and a six over total which sits one stroke outside of the cut mark, while Shane Lowry's second round 72 and seven over total meant he would not be at Galgorm for the weekend.

“It was good," said the overnight leader.

"A bit of a mixed bag out there but I think it is to be expected, the course played so tough.

"I think driving it is key around here with how thick the rough is and I think for most part I have driven it well the last few days, a lot of shots out of the fairway which can then give you a couple of chances to certain pins, and when I have had chances I have made a few putts as well. So probably a mix of driving and putting.

"It is so tightly bunched and doesn’t really take that much but probably a little bit of what has already happened this week. A few extra putts go in, also when I have been out of position, I have got up-and-down a few times, so it is just a couple shots being saved here and there coming into the weekend."

Englishman Robert Rock admitted he was reasonably happy with his day.

“I putted alright. I was struggling with the speed of long putts. I was hitting them a little too firm and it’s easy for them to run six foot by. They’re not the easiest putts coming back. I got control of that for the rest of the round. I drove it good, you have to do that," he said.

"The hardest bit is when you hit it in to the trees, chipping it out is really hard. There’s a lot of trees condensed in one spot, so you’ve got small gaps but then you’ve got a large expanse of thick, heavy rough to carry. You have to hit it low enough to get it under the branches, but high enough for it to skim over the top on to the fairway. So that’s really hard. Once you’re in the trees it’s hard to get it back on the fairway and make a bogey, even though you’re trying to be sensible.

"I got used to doing a lot of stuff at home, been taking my son to football and I’ve enjoyed doing that. It’s hard to get out of the habit of doing that, it’s been a bit more normal, life at home. I wanted to play the ones I was looking forward to."