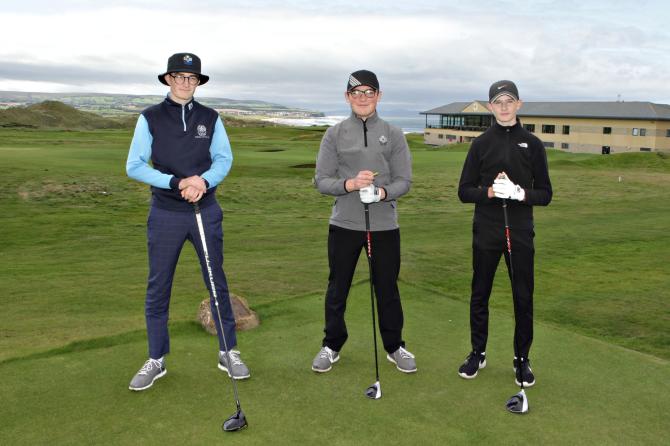 On the 1st tee for Champion of Champions Junior competition at the Riverside Course Portstewart are Seamus Donaghy, Jake Speers and Eoin Campbell. WK38KC39SP

MARTYN Freeman has been in good form at Bushfoot Golf Club of late without winning a trophy.

That was until last Saturday when his 39 point haul saw the five handicapper win the Lexie Duddy Memorial Trophy after countback.

Andrew bettered his 25 handicap by a shot to get 19 points out of the outward nine holes.

The turkey season commenced at Rathmore Golf Club last weekend and Liam McGuckian made sure of his festive treat by scoring 37 points to get the choice of the first bird.

It was Seniors Day at Portstewart Golf Club last Saturday and Steve Macauley came out on top, after countback, with a score of 37 points from his handicap of 13.

Playing off 16, Joshua Kidd took the honours at Portstewart Golf Club’s Riverside Course last Saturday by winning the Wulfrun Cup with a fabulous score of 46 points.

The Alexander trophy was being played for at Royal Portrush Golf Club on Saturday and Garth Logan hit form to win it with a score of 42 points.

* For all the details on these competitions, plus all the scoring from around the north coast's golf clubs, make sure you pick up a copy of The Chronicle each Tuesday.