Why Tiger would have been the Master once more 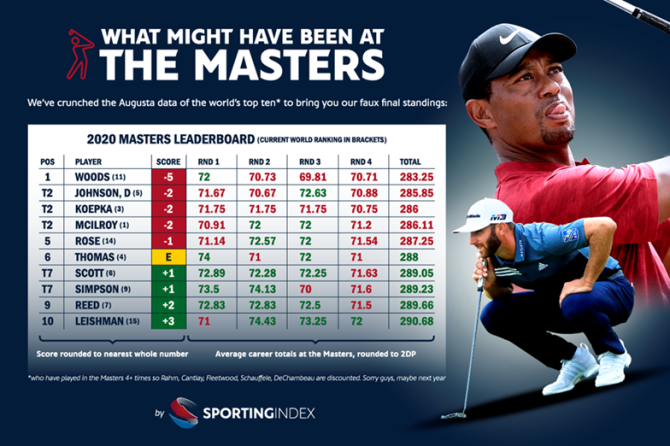 AUGUSTA should have been set for the 84th edition of the Masters this week, and despite circumstances leading to the postponement of golf’s first major of the year, research from Sporting Index reveals Tiger Woods would have likely reigned supreme once again.

The 2019 Masters winner and 14-time major champion holds the best average score at Augusta of the world’s top 25 ranked players in the sport that have completed four full Masters tournaments, with an average of -5 at the famous course.

It may come as a surprise that all of the golfers currently ranked higher than Woods, including star-studded names such as Rory McIlroy, Brooks Koepka, Dustin Johnson and Justin Thomas to name a few. all have higher average scores at the Masters when compared with Tiger.

DJ, Koepka and McIlroy come closest to the Californian with an average score of -2, while Justin Rose is just behind on -1.

Of the top 10 average scores from players in the top 25 in the rankings to have played four full Masters tournaments, Woods is the only player to have won more than one Green Jacket.

Neville Burdock, Head of Trading at Sporting Index, said: “Today would have been the first day of the 2020 Masters at Augusta and while golf fans the world over will wonder what might have been heading into this week we decided to take a look at the average scores of golfers in the top 25 that have completed four or more tournaments at Augusta, with Tiger leading the way by a considerable distance.

“While Woods’ hiatus in the sport might have led to many believing that he would be playing catch up again, his performances over the years in Georgia stand him in good stead, and he holds the best average score of his fellow top 25 world ranked pros.”

What do you think? Do you agree? If not Tiger, then who do you think would be wearing the famous green blazer come Sunday...?