What next for G-Mac? 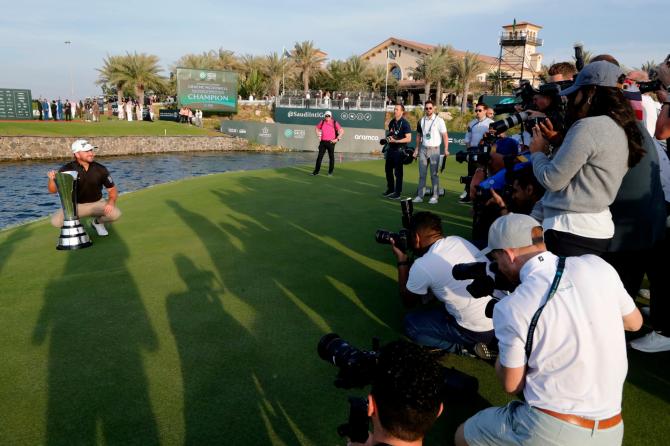 Graeme McDowell celebrates his win at the Saudi International.

YOU can't keep a good man down.

Graeme McDowell, without a win on the European Tour for six years, was back in the winners enclosure at the weekend following his impressive victory in the Saudi International.

The Portrush man held off a star-studded field, including world number one Brooks Koepka, to win the huge trophy - and an equally impressive cheque, for just over half a million dollars.

It represented a good week's work for the 40-year-old but, more than that, it opens up all sorts of possibilities for the next 12 months.

First, there is the likely invitation to the four majors after climbing back inside the world's top 50.

Secondly, the performance increases the possibility of the Rathmore clubman of resurrecting his Ryder Cup career.

A vice-captain as Europe defeated the USA to lift the trophy in France two years ago, McDowell could well be in the team by the time the 43rd staging of the competition takes place at Whistling Straits in September.

And, if all that wasn't enough, there is even the chance that he could be competing for Ireland in this summer's Olympic Games in Tokyo.

Quite the week, then, for popular G-Mac, who admitted that words of encouragement from his swing coach, Kevin Kirk, had helped inspire him at the Royal Greens Golf and Country Club.

"He said to me that there is 'no reason why the best golf in your career cannot be ahead of you' and I like that idea," said Graeme.

"This is huge and hopefully I can kick it on into the new season."

And who would bet against him.

A supremely talented golfer and, famously, winner of the 2010 US Open at Pebble Beach, McDowell is equally well respected for his battling qualities, honed as an amateur in his native Ireland.

With a happy home life and a number of successful businesses to his name, perhaps the time is right for McDowell to press on and possibly add to his sole major from ten years ago.

PSNI at the scene on Ballykenver Road near Stranocum where a man was shot in both the arms and legs in what police have described as a 'paramilitary-style attack' around 10:20pm on Saturday.