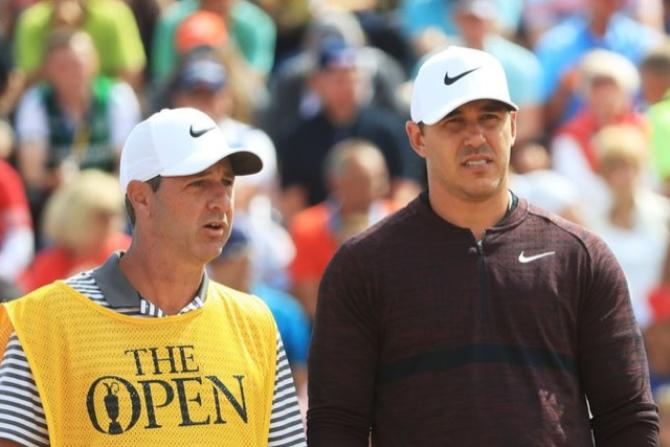 Portrush caddie Ricky Elliott (left) and Brooks Koepka, warming up for the 148th Open at Royal Portrush with victory at the USPGA in New York at the weekend.

PORTRUSH man Ricky Elliott was no doubt already looking forward to the return of The Open to Royal Portrush Golf Club later this summer.

Now, I'm sure he can hardly wait after helping Brooks Koepka claim the second major of the golf year with a wire to wire win USPGA win at Bethpage Black in New York on Sunday.

The pair produced an outstanding performance over the four days to see off their rivals and earn Koepka a fourth major title of his career.

However, they had to dig deep over the closing stretch as Dustin Johnson mounted a late rally.

Koepka, so assured over the opening three days, for the first time started showing signs of fallability.

In the end, his seven shot lead was whittled down to just two as he finished the tournament on eight under, his US Ryder Cup team-mate Johnson on six under.

The big-hitting American - the new world's number one - goes forward to defend his US open title at Pebble Beach next month.

And who would bet against him - and Ricky - given their ability to get the job done in the Big Apple.

Roll on Royal Portrush in July.