A history of the Ould Lammas Fair 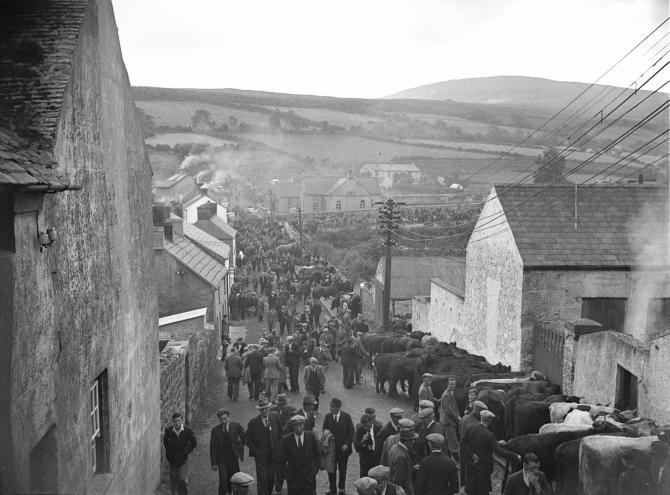 THE famous American blues singer Bob Dylan once sang “the times they are a changing” and he wasn’t far wrong, one thing that we cannot do is stop the march of time.
But as sure as the waves come crashing along the Moyle shore, the people will come far and wide from all corners of Ireland and farther afield to the Ould Lammas Fair.
Every year thousands of people line the streets of that ancient town of Ballycastle to celebrate, to meet old friends and most importantly to barter and to trade. It has always been this way, since as far back as I can remember, as far back as my grandfather can remember and as far back as his grandfather can remember.
Mr Dylan is right though, the times they are a changing, what would have started out as an agricultural fair where farmers and fishermen came from valley and glen has moved on greatly where the diamond would have been stocked with cattle, where the fairhill would have been lined with horse and cart, and the streets and seafront lined with “stalls” selling fish from the sounds of Rathlin and Islay.
The romantic memories of my youth where my grandmother would have given you a “wheen of pound” to go down and get some yellow man or even the Dulse from the familiar faces that would have lined the streets.
Now born and reared locally I could have availed of this at most times of the year but there is something special about that buzz or the feel-good feeling of them two days in August. In our family we actually emigrated from the hills of Culfeightrin into Ballycastle for the two days of the fair, that final hurray of summer before we had to get ready for the school year.
It was late nights and early morning, and many laps of the town in between to see new faces and old faces.
People of my era will remember the tricksters in the diamond, large blue barrels of water with a glass ashtray located at the centre and trying to drop pound coins into the water to land in the ashtray. There was usually just one winner, and I don’t ever recall it being me.
The lads dressed in their best native American Indian gear playing the pan pipes or Dominic Mc Afee walking on his hands down at the bottom of Rathlin Road. Awestruck I was, Ballycastle’s own Acrobat.
It seemed back then that every family or every business had a stall located somewhere along the narrow streets.
But times are a changing, the music stalls are slowly moving out, we as consumers now stream our music, or is instantaneously accessible in our hand-held devices.
The dodgy DVDs are now done away with and again accessible by a small swipe on our hand-held devices mostly for free too. While most people my age would have gotten their school bags or their “premier league tops” among the stalls on the all-weather pitch on Grottery park, now a days we only need to go to eBay or Amazon.
But STILL they come in their thousands because it is a special time, a special festival, and a special place.
The origins of the Lammas Fair are now lost to the hands of time, there is no definitive answer, the argument of how or when, will probably be as old as the fair itself. But let us have a look at the two commonly held theories about the fair.