Late O'Boyle points do the trick for Glenariffe 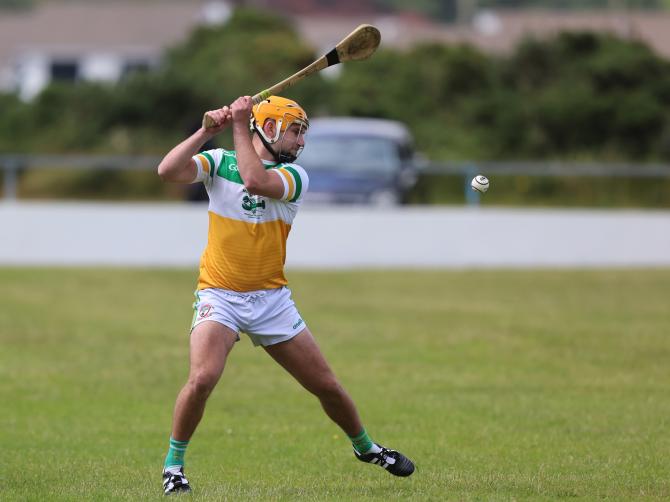 Glenariffe's Alex O'Boyle in action during his team's win over Bredagh in Sunday's Hurling League Division 2 game at Waterfooot. Pic by John McIwaine

Glenariffe held off a late rally from visitors Bredagh with a couple of late point from substitute Alex O'Boyle in this Antrim Hurling League Division 2 game Waterfoot, winning in the end by the narrowest of margin. This makes it five victories with a draw thrown in for good measure after a shaky start which saw them lose their opening two games.

Approaching the half way halt the Oisins, who had played with a strong wind behind them in the first half, had opened a five point gap but a goal from the visitors’ full forward Sean Hughes cut that back to just two points.

With the strong wind blowing straight down the field it was clear that the home team had a fight on their hands to survive but, boosted by a goal from returning county player David Kearney, they appeared to be holding out well until Bredagh came with a late charge which almost snatched the points.

Early points from David Kearney and Seanie McIntosh got the Glensmen up and running but points from Sean Hughes and Conor Costello for the visitors pegged them back.

Kearney and McIntosh again gave the home team the edge and after Sean McGourty sent one over for the Down side the Oisins took over with four unanswered points shared by Niall Murray, Aaron Cosgrove and David Kearney.

A great high catch and finish from Bredagh’s Conor Costello cut the gap back to four and though Odhran Gillan replied with one more for the home side to restore their five point cushion, full forward Sean Hughes found a world of space in the left corner of the Oisins defence and drilled a low shot past net minder Seanan McToal to leave just two between them at the break.

When Bredagh’s excellent left half forward Matt McAreavey got a point immediately on  the restart it was clear that the home were under pressure but a goal from midfielder David Kearney two minutes later proved a great boost.

McAreavey was proving a real handful for the hone sides defence and two more points on 12 and 17 minutes left just two between the sides.

Seamus McDonnell and Seanie Tosh, in reply to one by Sean Hughes, for the visitors kept a little bit of daylight between them, but Declan McCartney and McAreavey kept the Down men very much in touch.

A great free from distance by substitute Alex O’Boyle with 13 minutes still to play put four between the teams again but Bredagh hit four of the last five point of the game,

Indeed, it took another neat point from O’Boyle, and an extraordinary miss from a free straight in front of goals from the visitors, saw the Oisins squeeze through in a highly exciting game.

They now find themselves in fourth spot, one behind the Down side, two back from Cloney Gaels and three behind Carey with a couple of games remaining