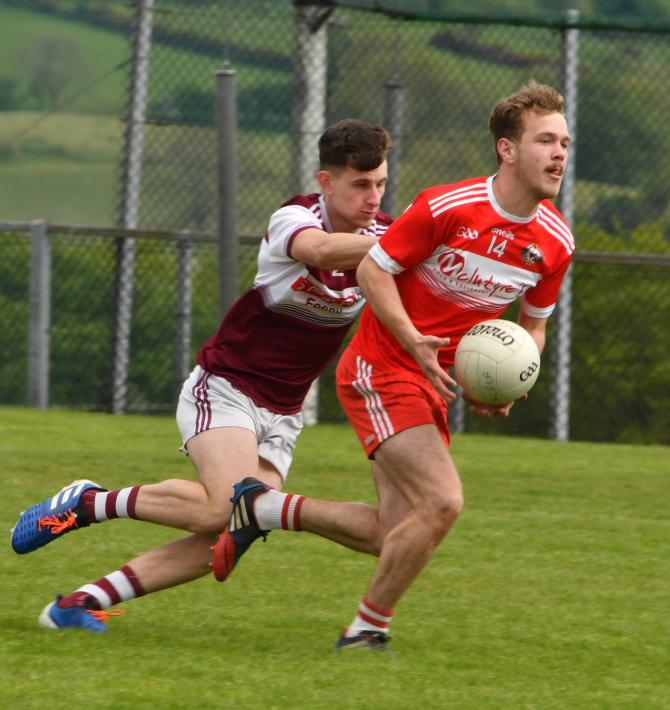 Kilrea travel to Steelstown in midweek.

As the senior league pushes past the halfway mark of the league the games are coming thick and fast with weekends and midweek dates being used.

Glen, without their county contingent, will be pretty pleased with the form shown by a number of players who were mainly on the subs bench during their successful championship campaign last season.

Dungiven are enjoying a good league run and to date Swatragh are not enjoying their run. The real test for Geoffrey McGonigle’s improving Dungiven will come in the championship when teams are at full strength but, in fairness, they too have been missing a few players on Derry hurling duty which has now finished. Swatragh have a lot of potential and when the serious business begins and they have big men like Oisin McWilliams and Anton Tohill back from county duty their real worth will be known. As things stand at present Dungiven look to be the more consistent team.

Ballinascreen are well in the race for the league title in what has been their best start to a season in a long time. They should have the measure of Banagher who have had mixed results but like a number of other teams have yet to field a full strength team. Due to work reasons Mark Lynch has not yet featured but we are sure to see him when championship time comes around. They have been blooding young players like Eamon Og Feeney with an eye to the future. Ballinascreen, too, have been bringing in fresh faces but in terms of numbers they have a lot more bodies than Banagher. On all known for it should be ‘Screen but they will have noticed that the Feeny men will have their hurling contingent back.

Glen should continue to keep the defence of their league title on track. They are strengthened by the availability of Ciaran McFaul and Jack Doherty who are no longer in the county panel. Ballinderry’s consistent scorer and former Derry player Ryan Bell is the main threat for the Shamrock’s who do not have the squad depth they once had. The manner in which some of the Glen players who warmed the bench during last year’s championship campaign are playing at present will leave competition for places a headache for the management. Form suggests Glen to keep on the winning trail.

When Slaughtneil lost to Dungiven in round six they had only two of the team that played in last year’s county final on board. With Derry hurlers out of all competitions for this year they will have a few more options for the remainder of the league. They travel to Magherafelt who have not been making a great impact but experimentation is the name of the game. The championship will be uppermost in the mind of the Emmett’s manager Paul Bradley and he will probably be impressed enough with some of the non regulars who are currently in the team. Magherafelt will probably come out on top but Slaughtneil will not be handing them any gifts.

Steelstown are finding life hard at senior level but they have not yet fielded anywhere near a full strength team. They are at home to Kilrea in what looks to be a 50/50 game. Kilrea have done reasonably well after being moved up a grade from last year. Both teams play attacking football with the Brian Og’s hoping to finish better than they did in their last home game against Lavey when they let victory slip through their fingers. Kilrea do not travel well so there is every opportunity for Steelstown to get a second league victory.

Lavey have coped very well with over half their regular side involved with Derry teams. They have lost just two games so far and are very much in contention lying third in the table. After a few barren years there are indications that the Erin’s Own are emerging as a major force in Derry football again. Newbridge do not have the same depth as Lavey and when their two key defenders Padraig McGrogan and Conor Doherty are county tied it leaves holes in their defence. A number of very successful under age teams has left Lavey on the doorstep of something big once these players mature. Meantime they should pick up another two points from this visit to The Creagh.

Over the years The Loup have been difficult opposition for the Coleraine boys and it is not likely to be any different. Neither has any players tied up with county squads so they have no problem fielding at full strength. Both have drawn two games to date and it would not be a surprise if this is another one. Considering the number of relatively new faces that Eoghan Rua have been using they will be happy enough with the campaign so far. Their away win over Glen was a real morale booster. Sean Leo McGoldrick still steers the Eoghan Rua ship from centre half back but experienced men like him can bring the younger players on. The Loup have an experienced group of players and are never blown away by any opposition. It looks hard to call!

Claudy have yet to enter the winners' enclosure this season and that is unlikely to change for their trip to Sean Brown Park. With the much travelled Damian Cassidy back at the helm the Tones look to be heading in the right direction with a clutch of good young players. Claudy to their credit keep battling on but every game is an uphill struggle with retirements in an already depleted panel. With no victories this season and only one in the last the future does not look promising for the Mitchel’s right now. It is hard to see anything other than a comfortable Bellaghy victory.